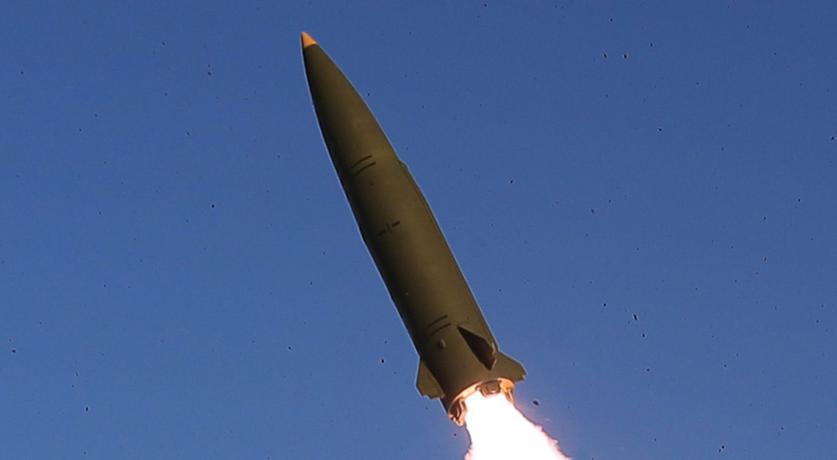 On 16 April 2022, the Democratic People’s Republic of Korea (DPRK) reportedly conducted successful tests of a new type of short-range ballistic missile. The DPRK claimed that this new type of missile would boost the firepower of its frontline long-range artillery units and enhance the efficiency in the operation of its tactical nuclear weapons. [1]

On 17 April 2022, the Republic of Korea (ROK) announced that the DPRK had fired two missiles around 18:00 on 16 April. The two missiles both flew 110 km at an apogee of around 25 km and a top speed of Mach 4. [2] As a photo released by KCNA showed that the target was one of the small islands frequently used by the DPRK for test firing, the likely launch location was identified as a small beach area near the city of Hamhung on the east coast of the DPRK (Figure 1).

The missiles flight tested on 16 April were small, single-stage, solid-propellant ballistic missiles. Their general layout is structurally similar to that of the KN-23, [3] the Hwasong-11Na (화성-11나)(KN-24) and a larger short-range ballistic missile with a stated warhead weight of 2.5 tons [4] (Figure 2). 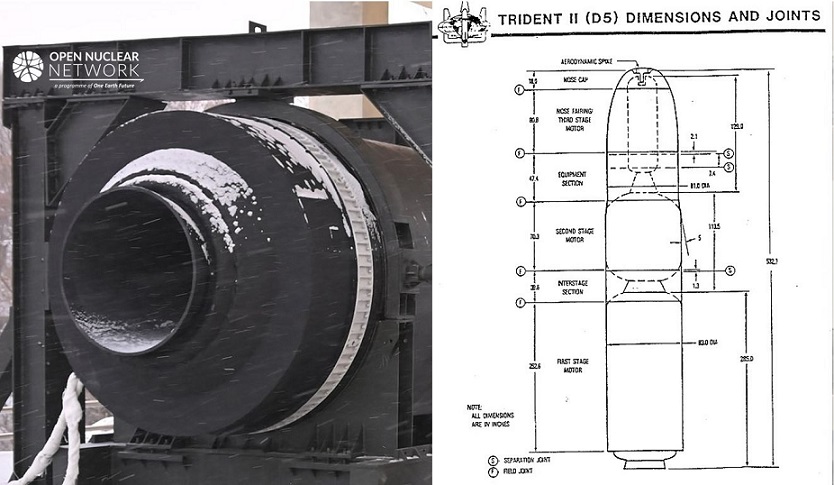 On the basis of appearance and low flight altitude (25 km apogee), it is likely that the flight profile of this new missile type is similar to that of the three existing missile types referred to above, all of which fly at low altitude within the atmosphere and perform pull-up manoeuvres during flight. [5]

However, the missile type tested on 16 April 2022 appears to be significantly smaller and lighter than the other three short-range ballistic missile types (Figure 3). The similarities common to these four missile types indicate that the DPRK is likely utilising the same core technologies to develop a series of ballistic missiles in different weight and range classes. 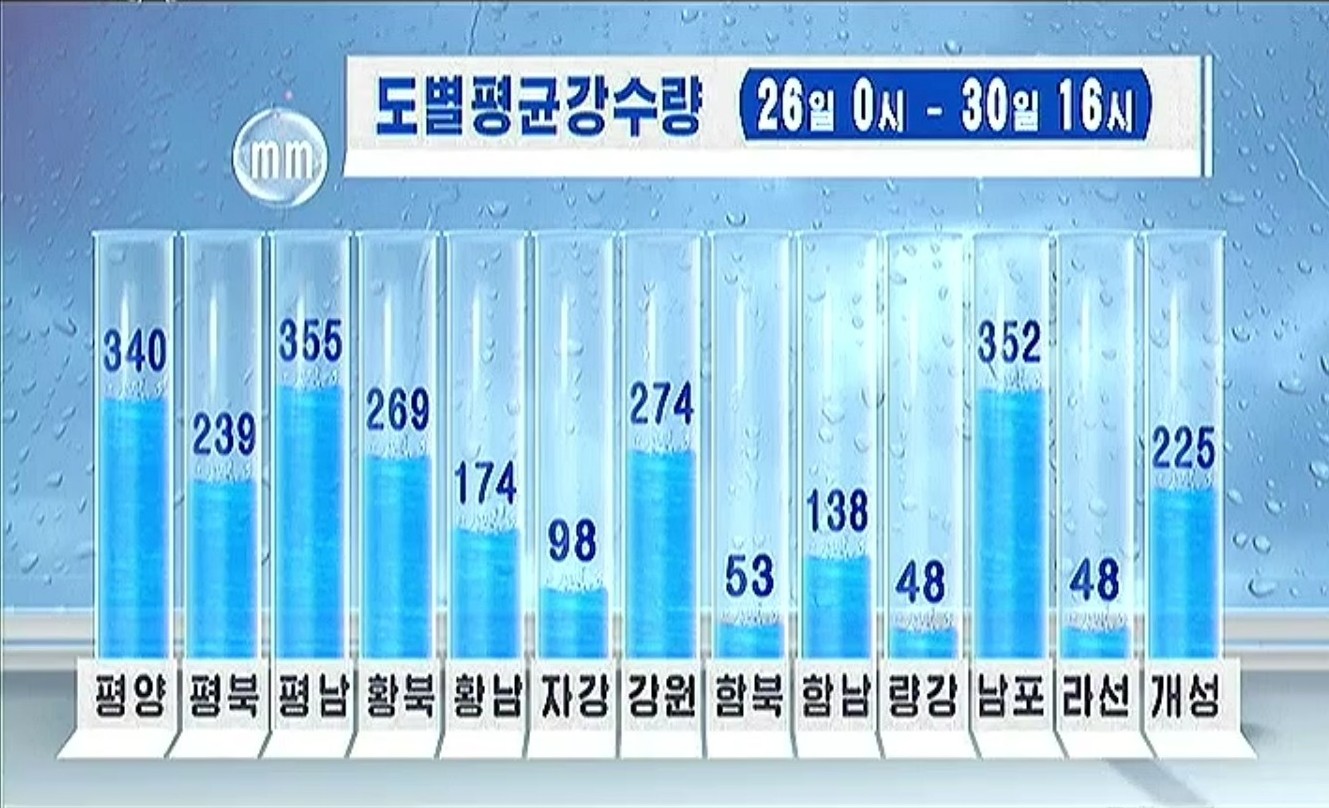 Figure 3. Left: the ballistic missiles tested on 16 April 2022 appear to have been carried by and launched from a three-axle truck carrying four missile canisters. Right: KN-23, Hwasong-11Na (KN-24) and the short-range ballistic missile with “2.5 ton warhead.” Images: KCNA

The new missile also appeared to be similar in size and range to the Korea Tactical Surface-to-Surface Missile (KTSSM, Figure 4), [6] which was estimated to have a range around 120 km. [7] Though the 16 April 2022 test was the first known test of the DPRK’s new short-range ballistic missile type, and did not necessarily represent the maximum range, it is likely that its maximum flight range would be around or below 200 km.

Figure 4. The ROK’s KTSSM demonstrated pinpoint accuracy, which could be used to destroy tunnels, bunkers and hardened artillery positions of the DPRK. Images: Agency for Defense Development, ROK.

Combined with the “super-large calibre” multiple rocket launcher (KN-25) and land-attack cruise missiles that have been flight tested in recent years (see Table 1), the DPRK appears to be developing a new generation of multi-layered land-attack munitions with different flight characteristics.

Table 1. Land-attack munitions flight tested by the DPRK since 2019 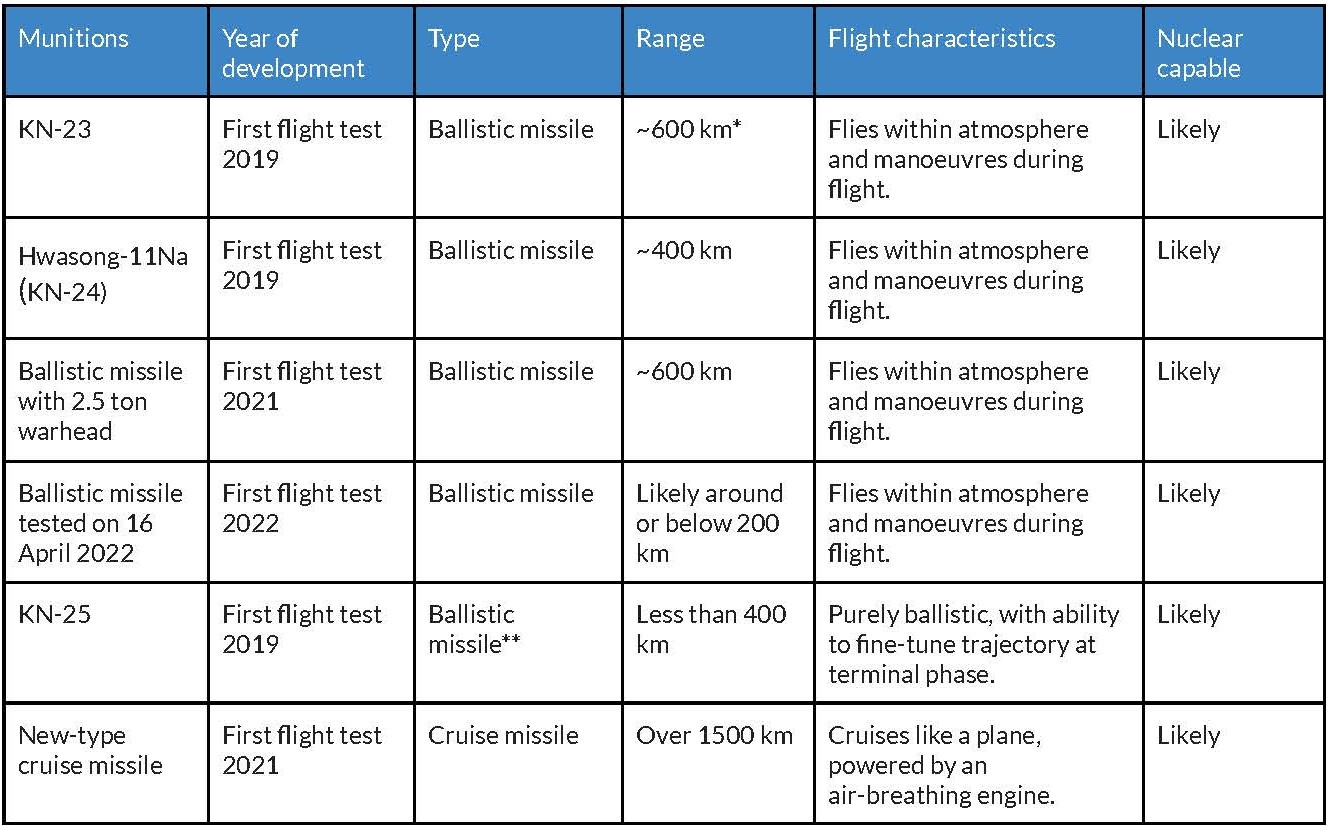 * On one occasion in 2019, however, the missile was claimed to have flown about 800 km. See: Tianran Xu, Jaewoo Shin, Katsuhisa Furukawa, “The first DPRK missile launch from a rail mobile launcher,” ONN, 16 September 2021, available at: https://opennuclear.org/publication/first-dprk-missile-launch-rail-mobile-launcher

** The KN-25 are commonly referred to as multiple rocket launchers; however, they are also de-facto ballistic missiles.

Taken together, the two ballistic missiles tested on 16 April 2022 and the other weapon systems identified in Table 1 above could be interpreted as the DPRK’s attempt to respond and perhaps mirror missile development of the ROK. [8] However, while the precision guided munitions developed by the ROK (such as the Hyunmoo-2 series ballistic missiles, the Hyunmoo-3 cruise missile, the Hyunmoo-4 ballistic missile and the KTSSM) are strictly conventionally armed, their DPRK counterparts seem to be able to deliver nuclear weapons.

As indicated by several statements and expressions of policies issued by the DPRK in 2013 and 2016, [9] the DPRK’s nuclear posture was primarily for strategic deterrence. In recent years, however, in addition to the short range missile systems discussed above, several statements have been made by the DPRK that indicate a possible shift toward the early use of tactical nuclear weapons.

During the 8th Party Congress of the Workers’ Party of Korea held in January 2021, DPRK leader Kim Jong Un reportedly praised the development of the “ultra-modern tactical nuclear weapons including new-type tactical rockets and intermediate-range cruise missiles whose conventional warheads are the most powerful in the world.” [10] During the same Congress, one of the core plans and strategic tasks for the 2021 to 2025 period was identified as “making nuclear weapons smaller and lighter for more tactical uses.”

About two weeks before the missile flight tests on 16 April 2022, and in response to a comment by ROK Defense Minister Suh Wook on the ROK’s preemptive strike capabilities, [11] Kim Yo Jong, the Vice Department Director of the Central Committee of the Workers’ Party of Korea and sister of the DPRK leader, warned that the DPRK would “inevitably” use nuclear weapons to eliminate the military of the ROK should the ROK choose a military confrontation: 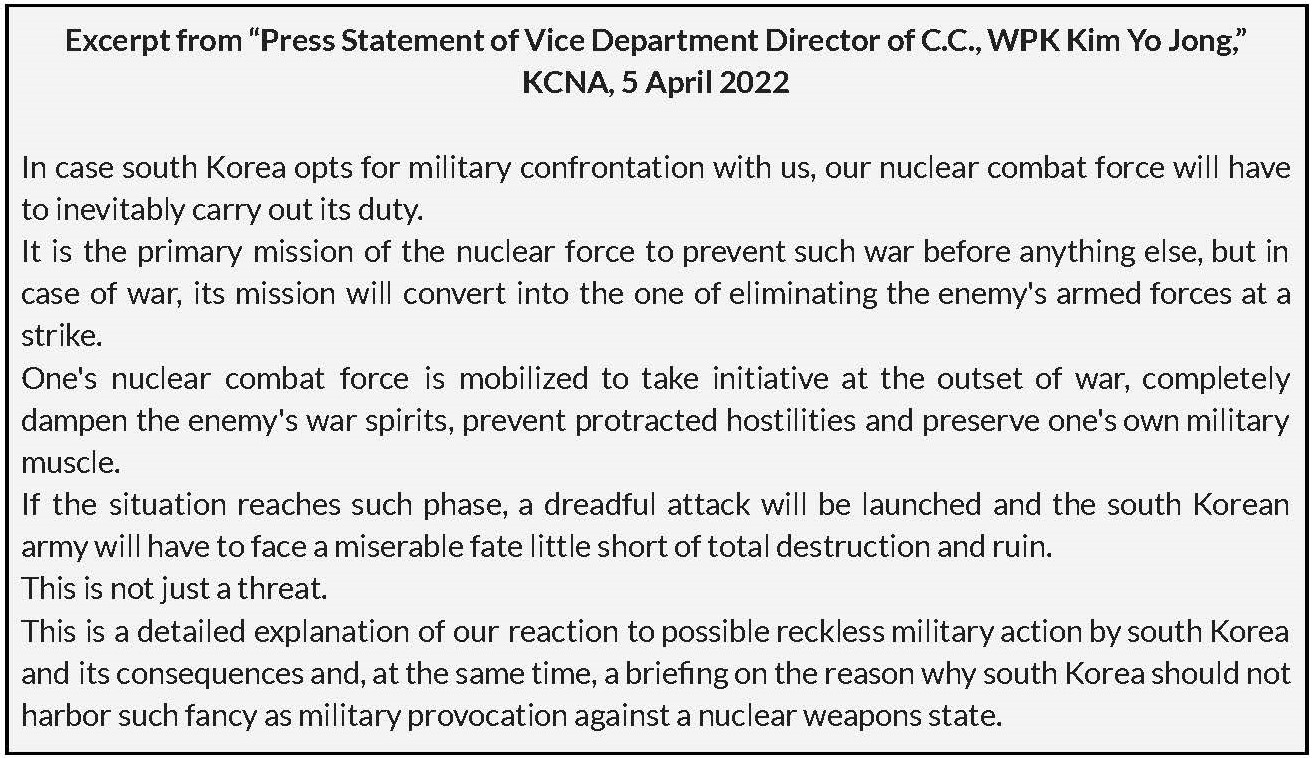 Kim Yo Jong’s comment that “one's nuclear combat force is mobilized to take initiative at the outset of war, completely dampen the enemy's war spirits, prevent protracted hostilities and preserve one's own military muscle” appeared to indicate that the DPRK may be moving towards a nuclear war-fighting strategy, involving early use of tactical nuclear weapons in order to offset conventional disadvantages. Though statements from Kim Yo Jong are not as authoritative as those of Kim Jong Un himself, her description of early and preemptive nuclear use does appear to have been deliberately crafted, and is therefore likely indicative of the attitude of the leadership.

Moving further in this direction, the 17 April 2022 KCNA report on the tests of the new ballistic missile stated that “the new type tactical guided weapon system [...] is of great significance in drastically improving the firepower of the frontline long-range artillery units and enhancing the efficiency in the operation of tactical nukes of the DPRK and diversification of their firepower missions.” [12] Though the DPRK supreme leader is understood to have the absolute authority to launch the DPRK’s nuclear weapons, [13] this statement may indicate that some nuclear launch authority could be delegated to frontline military commanders.

The development of short-range guided weapons and related recent official statements are indicators that the DPRK may be moving to a nuclear posture that would either leverage its nuclear capabilities to threaten rapid nuclear escalation to compel its opponents into concessions, or to actually utilise such capabilities in warfighting.

A nuclear war-fighting strategy involving the use of tactical nuclear weapons at an early stage could embolden the DPRK to initiate a provocative action with false confidence in controlling a low-level conflict: if its adversaries deem its nuclear threat is proportional and credible, they will back down — escalation to de-escalate. However, this could result in rapidly escalating tension that could quickly go beyond control, and could invite massive preemptive strikes aiming at neutralising the DPRK’s nuclear forces.

A nuclear war-fighting strategy requires higher and more constant troop readiness, putting more burden on the chain of command and control. In this context, nuclear weapons could be used more easily as a result of error, uncertainty or misdirection in times of tension or conflicts.

[1] The DPRK has not defined what it means by “tactical” nuclear weapons. There is also no consensus among nuclear-possessing States regarding the definition of tactical nuclear weapons. See: “Fact Sheet: United States Nonstrategic Nuclear Weapons,” Center for Arms Control and Non-proliferation, March 2022, available at: https://armscontrolcenter.org/u-s-nonstrategic-nuclear-weapons/. Some common definitions characterise nuclear weapons as “tactical” when they possess relatively small yields, have relatively short delivery ranges or are intended for battlefield (counter-force) use as opposed to strategic use (counter-value). For example: “Tactical nuclear weapons,” Encyclopaedia Britannica, available at: https://www.britannica.com/technology/tactical-nuclear-weapon

[3] “KN-XX” is the US designation. The official designation of this missile remains unknown. See: “DPRK parade viewbook 2022,” ONN, 14 April 2022, available at: https://opennuclear.org/publication/dprk-military-parade-viewbook-2022

[4] The DPRK claims that the missile has a warhead of 2.5 tons. Several Member States of the UN Security Council assessed that the mass of 2.5 tons may refer to the entire weight of the missile after burnout. See: UN Panel of Experts report S/2021/777, available at: https://undocs.org/Home/Mobile?FinalSymbol=S%2F2021%2F777&Language=E&DeviceType=Desktop&LangRequested=False

[8] “Worse still, they [ROK authorities] are getting crazier about modernization of armed forces, labeling our development of various conventional weapons, which pertains entirely to the just exercise of our sovereignty, a ‘provocation.’ If they want to find fault with it, they should first give an explanation for the chief executive's personal remarks calling for furthering the efforts for securing and developing latest military assets, saying that ballistic and cruise missiles with more correct and stronger power and longer range than the existing ones will be developed and a ballistic missile with the world's heaviest warhead was developed. They should also provide a convincing explanation for the purpose and intention in their continued introduction of cutting-edge offensive equipment.” See: “On Report Made by Supreme Leader Kim Jong Un at Eighth Congress of WPK,” KCNA, 1 January 2021

[9] For example, the Law on Consolidating Position of Nuclear Weapons State adopted by the Supreme People’s Assembly in 2013 stated that “[nuclear weapons] serve the purpose of deterring and repelling the aggression and attack of the enemy against the DPRK and dealing deadly retaliatory blows at the strongholds of aggression until the world is denuclearized.” The law also stated that the “nuclear weapons of the DPRK can be used only by a final order of the Supreme Commander of the Korean People's Army to repel invasion or attack from a hostile nuclear weapons state and make retaliatory strikes.” See: “Law on Consolidating Position of Nuclear Weapons State adopted,” KCNA, 1 April 2013. On the occasion of its fourth nuclear test on 6 January 2016, the DPRK also reiterated its conditions for nuclear use stipulated in the Law on Consolidating Position of Nuclear Weapons State that “it will neither be the first to use nuclear weapons nor transfer relevant means and technology [...] as long as the hostile forces for aggression do not encroach upon its sovereignty.” See: “DPRK proves successful in H-bomb test,” KCNA, 6 January 2016. In April 2016, Kim Jong Un reportedly ordered the military to “ensure a prompt and safe operation of nuclear attack system in the state of the nation’s utmost emergency.” The text did not explain the phrase “the nation’s utmost emergency.” However, this possibly refers to events that threaten the existence of the DPRK leadership and government rather than low-level military threats. See: “Kim Jong Un Watches Ballistic Rocket Launch Drill of Strategic Force of KPA,” KCNA, 11 March 2016