In previous publications dated 28 March and 6 April 2022, ONN reported signs of increasing activities within the Punggye-ri nuclear weapon test site of the Democratic People’s Republic of Korea (DPRK), especially at the secondary entrance to Tunnel 3 (also known as the South Portal). [1] Those signs included clear indications of a newly uncovered tunnel entrance and new spoil piles, and further signs of vehicle traffic, which indicated that the excavation of Tunnel 3 had been steadily proceeding.

New satellite images from 8 and 14 April 2022 showed further developments at this location, including the following (Figures 1-3): 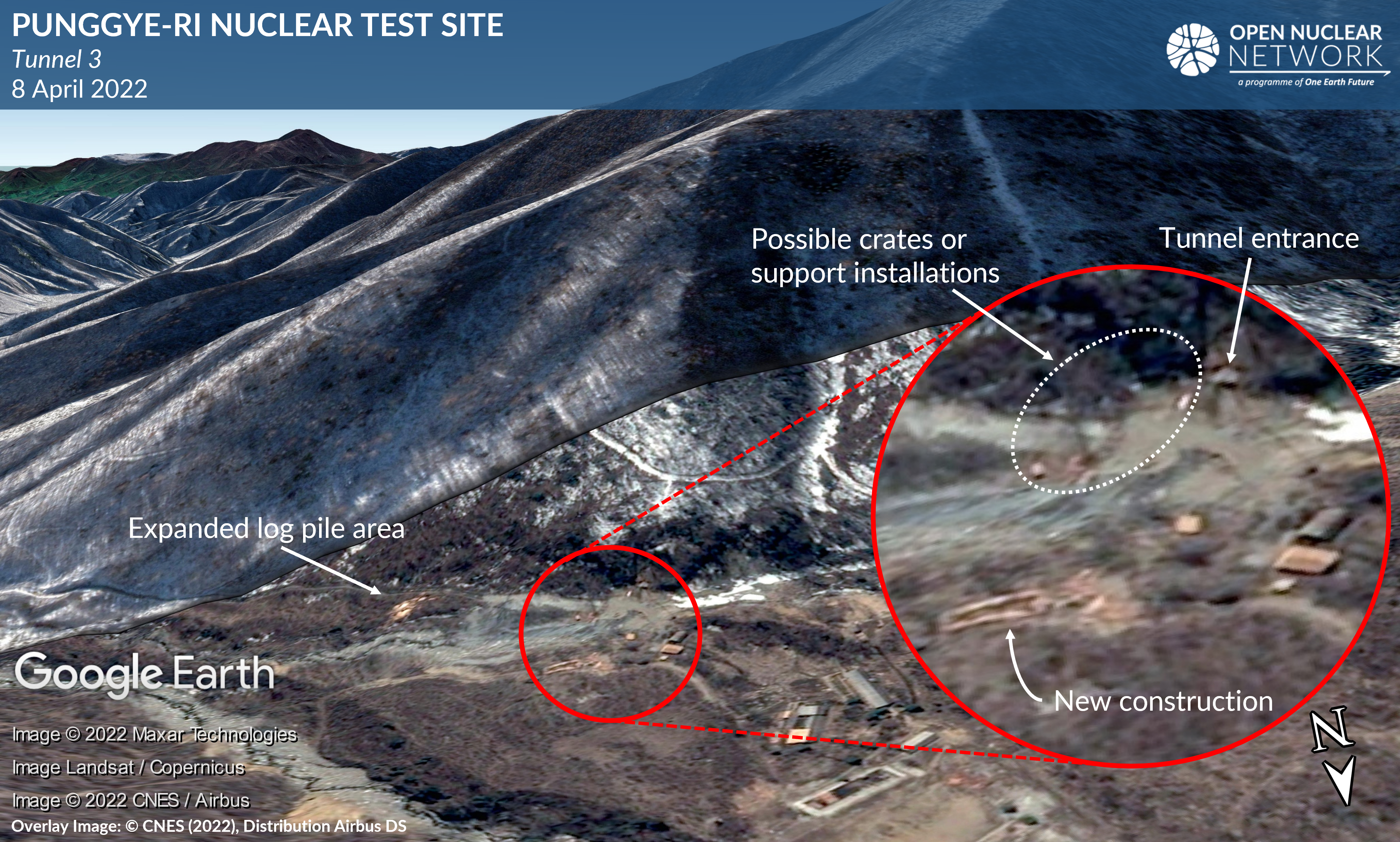 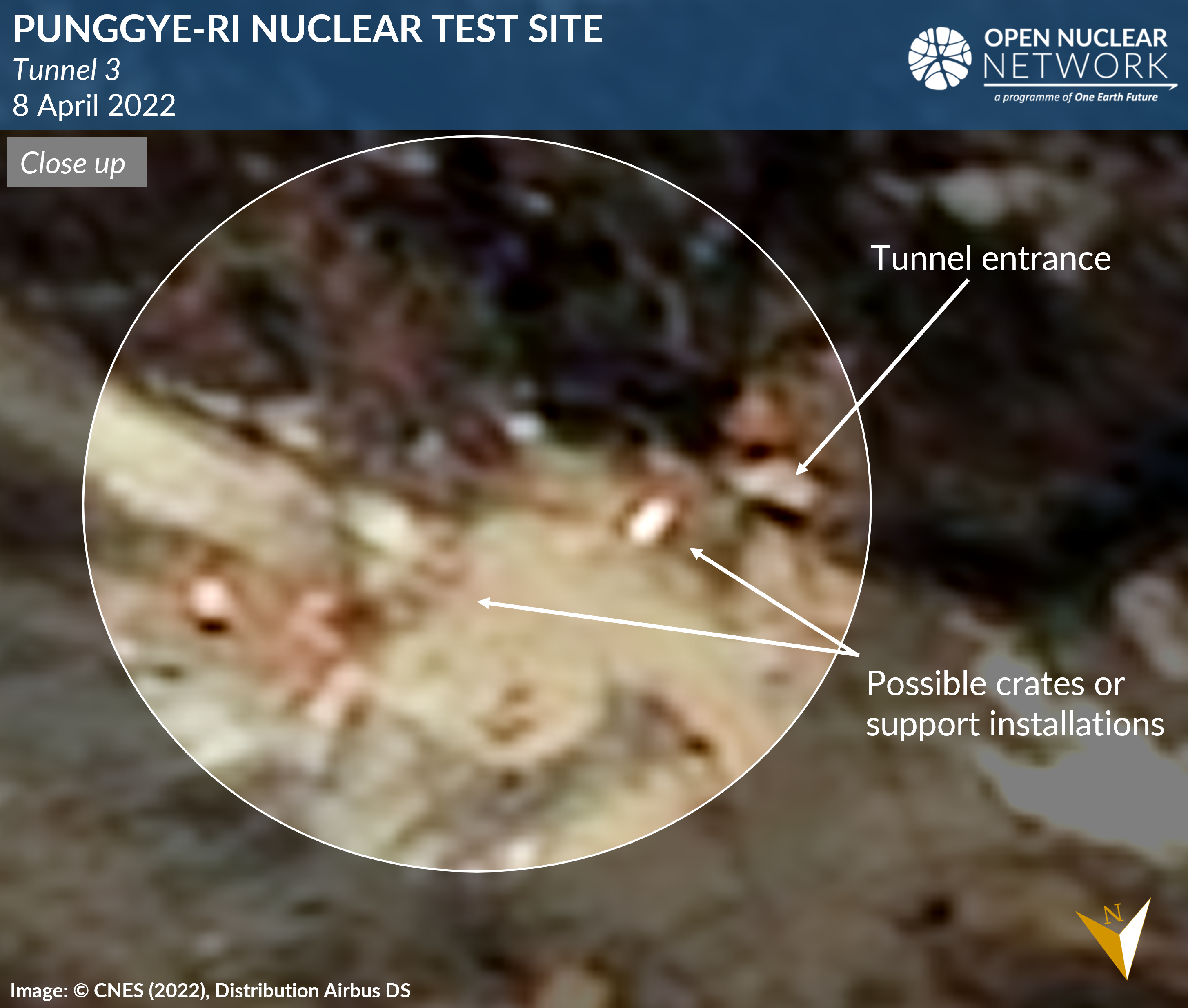 A comparison of satellite images from 6 and 14 April 2022 does not appear to show a notable further expansion of the spoil pile near the secondary entrance to Tunnel 3. While additional evidence is needed to conclude with confidence, it is assessed as possible that the excavation activities might have slowed down or been temporarily suspended. Another possibility is that the work has now shifted to reinforcement of the internal tunnel structure,  construction of functionally associated structures nearby, and installation of supporting equipment. 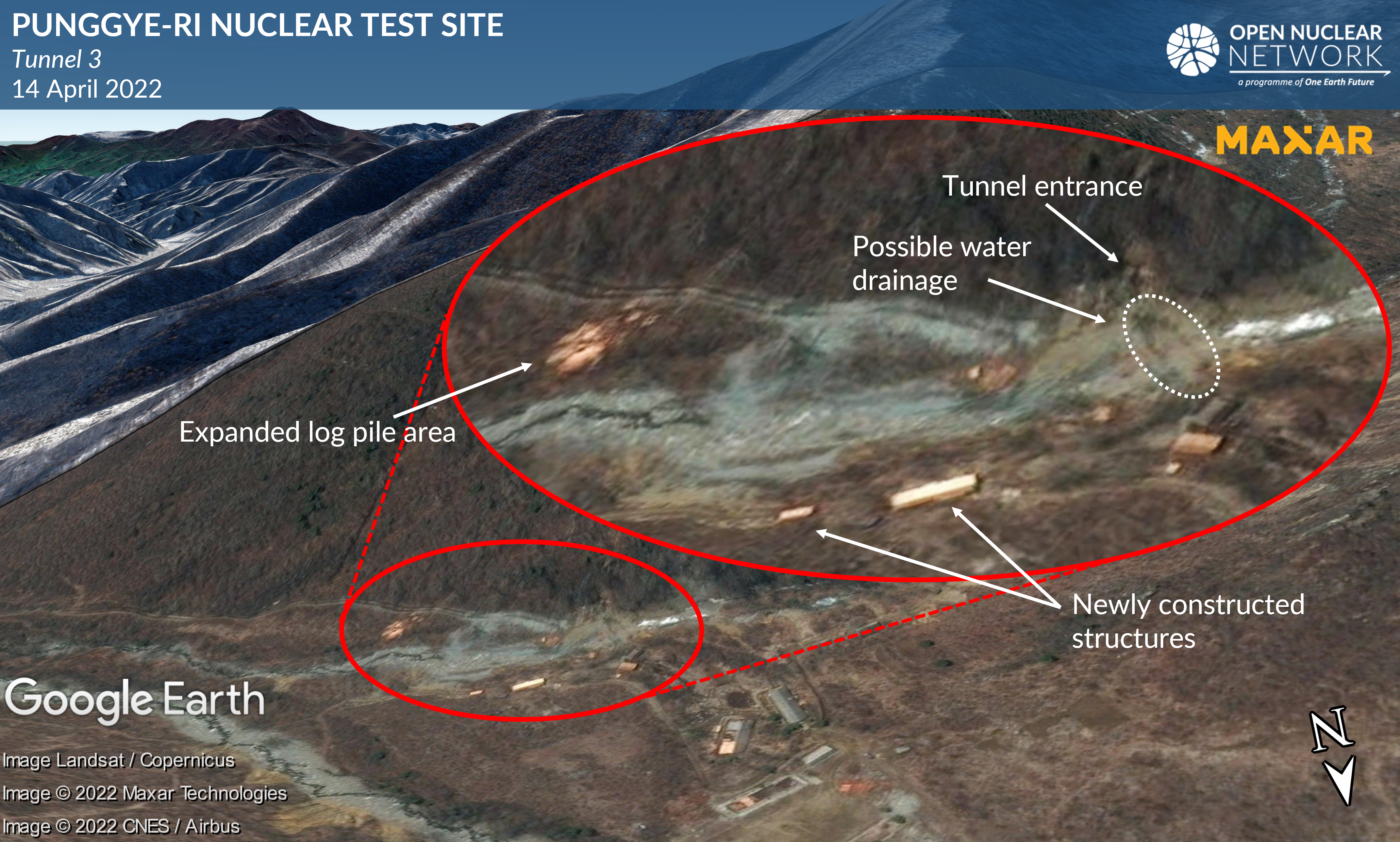 A new satellite image from 14 April 2022 showed: a change in the coloration of the ground  in the yard of the main administration area, which has been assessed as possibly indicating lumber processing waste; newly visible log piles within the foundation of a structure which was demolished in May 2018; and another structure under renovation since no later than March 2022 (Figure 4). Signs of traffic and presence of a possible vehicle are also observed  in the yard on this satellite image. 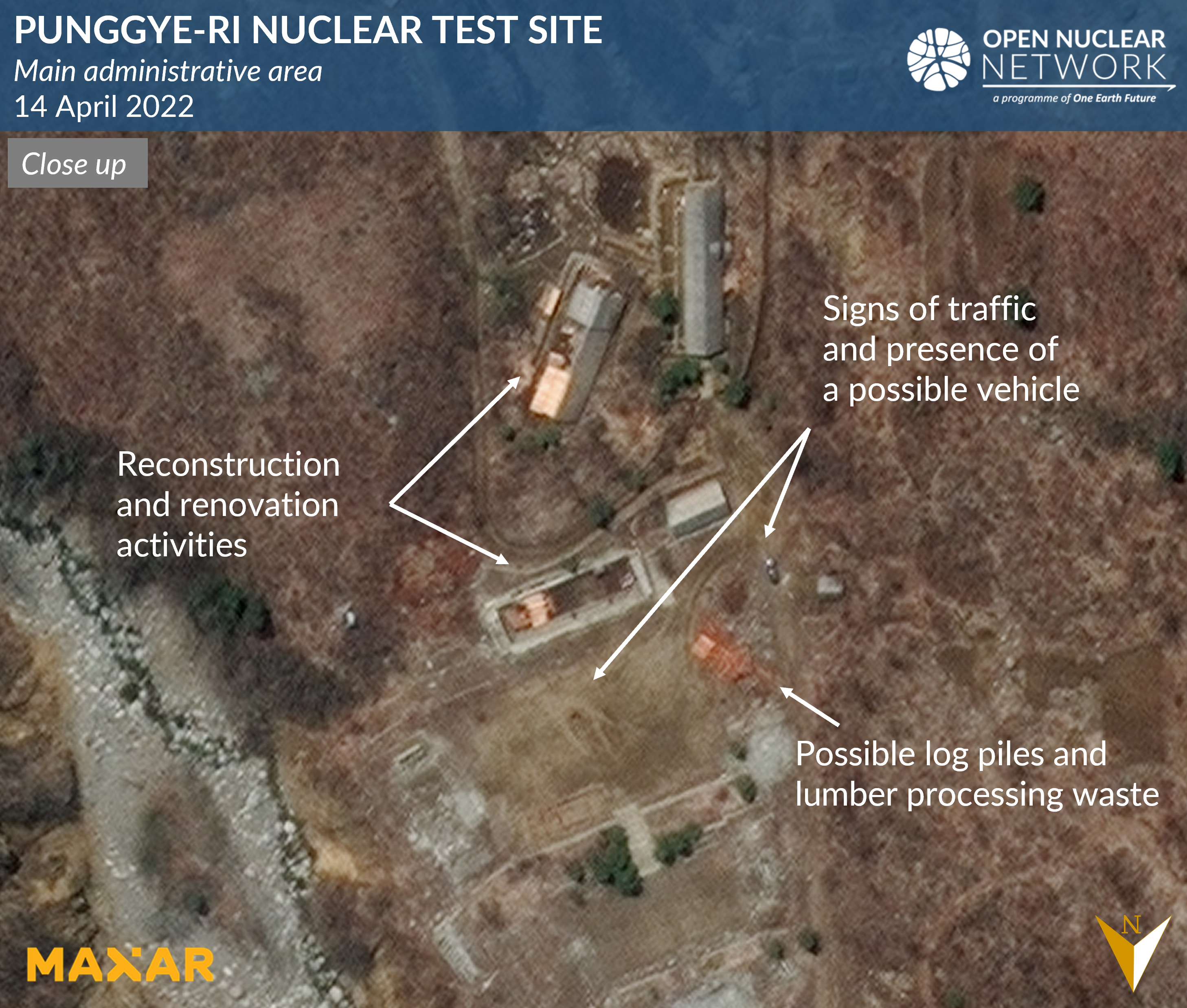 Figure 4: Close up of the main administrative area as of 14 April 2022. Image: © 2022 Maxar Technologies. All Rights Reserved. Reprinted by permission.

No excavation activity has been  observed in open source satellite imagery available as of 14 April 2022 at Tunnels 1, 2, and 4 (also known as the East Portal, the North Portal and the West Portal respectively). In particular, the area near the entrance to Tunnel 4 deserves special scrutiny because this tunnel had been constructed for use in nuclear tests but was never used, and was later demolished in May 2018 (Figures 5-6). 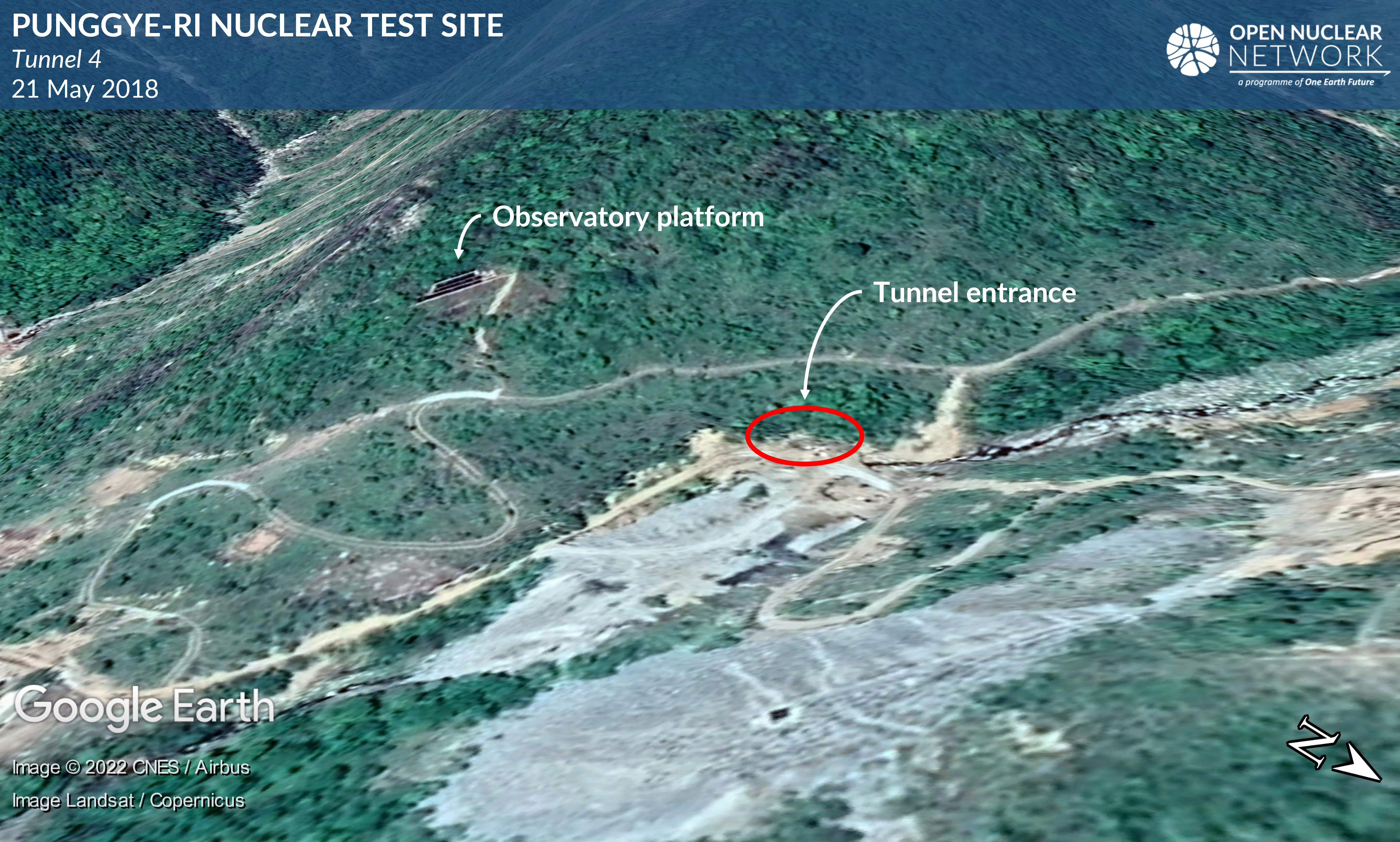 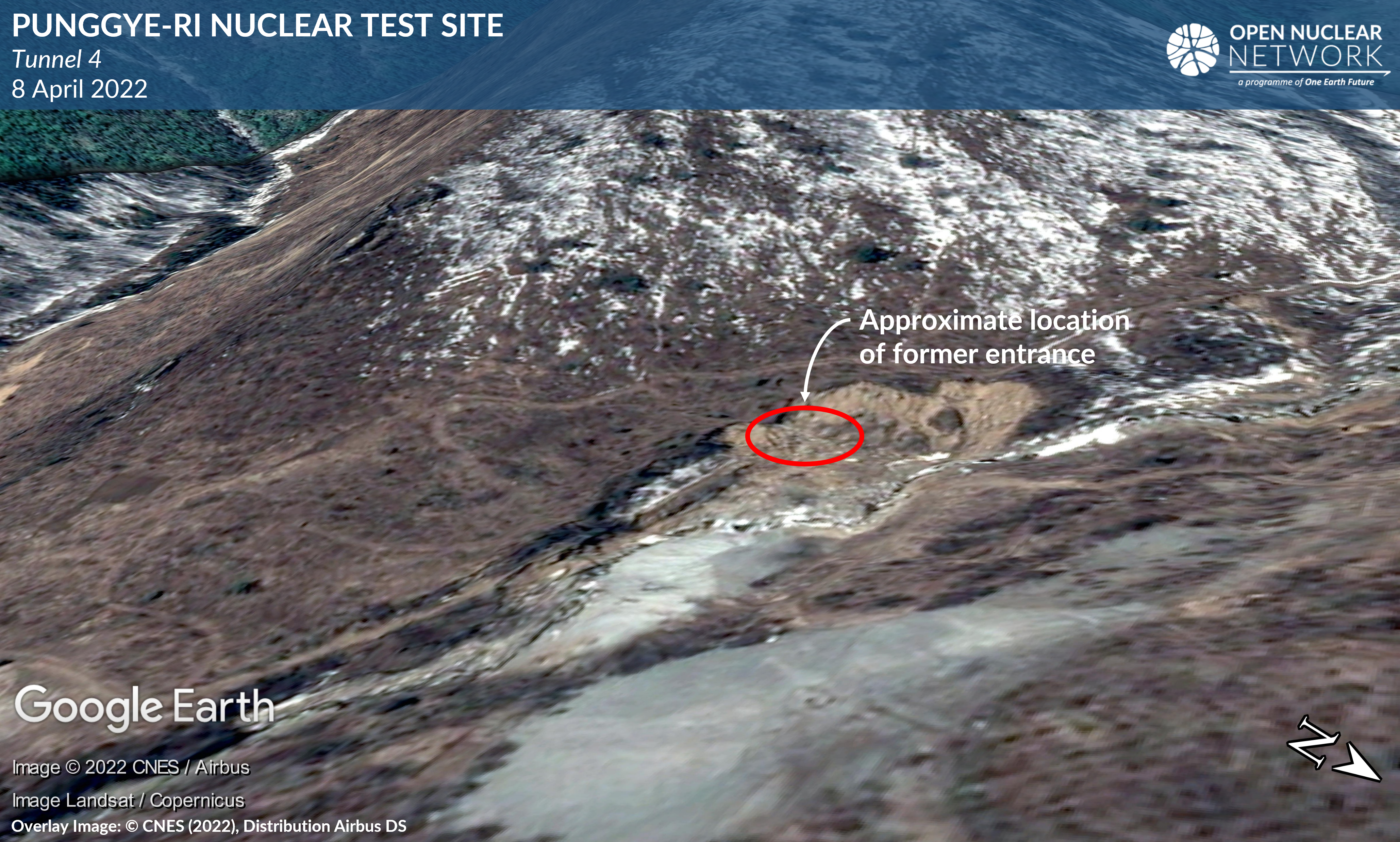 As noted in this report and ONN’s previous reports, available satellite images have shown recently increased levels of activity near both the secondary entrance to Tunnel 3 and the main administrative area of the Punggye-ri nuclear test site. It remains difficult to assess the possible timing of a potential nuclear test, as this would be influenced by a range of factors. In particular, from a technical point of view, key variables may include the extent to which the internal structure of Tunnel 3 was damaged by the May 2018 explosion, and the number of nuclear tests the DPRK plans to carry out inside Tunnel 3, which may require excavation of additional tunnel branches, thus lengthening the time that would be required to complete the necessary excavation. [2]

ONN will continue to monitor developments at the site.

[2] Before the nuclear test in February 2013, experts noted several signs clearly visible on available satellite images showing DPRK’s preparation for the nuclear test inside Tunnel 2 (also known as North Portal) between approximately 3 months before the nuclear test and a few days before this test. Those signs include the presence of a large number of personnel near Tunnel 2 and the main administrative area, signs of heavy traffic and presence of vehicles, concealment of the entrance to Tunnel 2, probable cable lines stretching from this tunnel entrance, and presence of a probable satellite communication antenna dish near this tunnel entrance. Additionally, a few to several days before this nuclear test, available satellite images showed that all materiel and vehicles were cleared from the area near this tunnel entrance, except for the probable awning over the entrance. In contrast, Jack Liu of 38 North noted that in the run up toward the nuclear test in January 2016, no clear signs were visible, other than those related to excavation activities, such as the presence of mining carts and vehicles and probable tunnel water drainage ditch visible near the entrance to Tunnel 2. Liu assessed that the DPRK had likely improved its capability to conceal its preparation for the nuclear weapon test. See: Jack Liu, “The Challenge of Predicting Future North Korean Nuclear Tests”, 38 North, 1 February 2016, available at: https://www.38north.org/2016/02/punggye020116/; David Albright and Robert Avagyan, “Monitoring Activity at Punggye-ri Nuclear Test Site”, 3 February 2013, available at: https://isis-online.org/isis-reports/detail/monitoring-activity-at-punggye-ri-nuclear-test-site/10#images