While North Korea gets most of the attention when it comes to the subject of missile proliferation on the Korean Peninsula, South Korea too has a substantial missile program. The public received a rare glimpse into South Korea's missile programs in May, when South Korean news outlets reported on a test of a new missile, the Hyunmoo-4. These reports can be verified with open source information, including navigational warnings and commercial satellite images.

South Korea has been developing long-range ballistic missiles since the late 1970s. The United States provided support for this program in exchange for Seoul’s adherence to guidelines limiting the range and payload of these missiles. Those guidelines have been steadily revised to accommodate South Korea's growing missile capabilities. When the guidelines were first promulgated in 1979, South Korea was limited to missiles that could carry a 500kg payload to 180km. These guidelines were relaxed in 2001 (500kg/300km) and again 2012 (500kg/800km).

In 2017, the Trump Administration eliminated the payload restriction entirely. According to press reports, South Korea sought an end to the payload restriction to develop a new missile, the Hyunmoo-4. The Hyunmoo-4 is reportedly an 800 km-range missile with a 2,000 kg payload that would be used for destroying hard and deeply buried targets, such as the DPRK command center near Chunghwa.

The removal of the payload restriction cleared the way for South Korea to test the Hyunmoo-4, which was reportedly already in development. Press reports now indicate that South Korea tested this missile for the first time on March 24 - although word of the test did not become public until The Asia Business Daily published a story on May 6. The Asia Business Daily quoted "government officials" as saying that senior officials from the Agency for Defense Development (ADD) had overseen a test from the ADD Anheung Test Center in mid-March.

This was unusual - normally a story like this would be announced by the South Korea's presidential administration (known as the Blue House) or the Agency for Defense Development. But in this case, both the Blue House and ADD declined to comment on The Asia Business Daily story. The report, however, led to a number of other stories on May 7 by outlets such as the government-funded Yonhap and JoongAng Ilbo that contained anonymous officials adding the details. Still another article came out on May 29 form JoongAng Ilbo. These officials indicated that the test had occurred on March 24, that there were two launches, that one of the missiles failed, and that the test was conducted from an offshore launch site.

First, South Korea issued a series of navigational warnings for March 24 that show both the location of the launch, as well as the splashdown point. Notices like these are necessary safety precautions, but they are also important tools for tracking missile launches. (That's why Datayo makes Notices to Airmen available in its GIS data.)

One navigational warning for March 24 is centered on a location that has been previously identified at the offshore launch site at the ADD Anheung Test Center. Another navigational warning appears to be a splashdown point about ~450km from the launch point. (Several news stories indicated that South Korea had "lofted" the missile to reduce it's 800 km range to avoid waters claimed by Japan and China.) 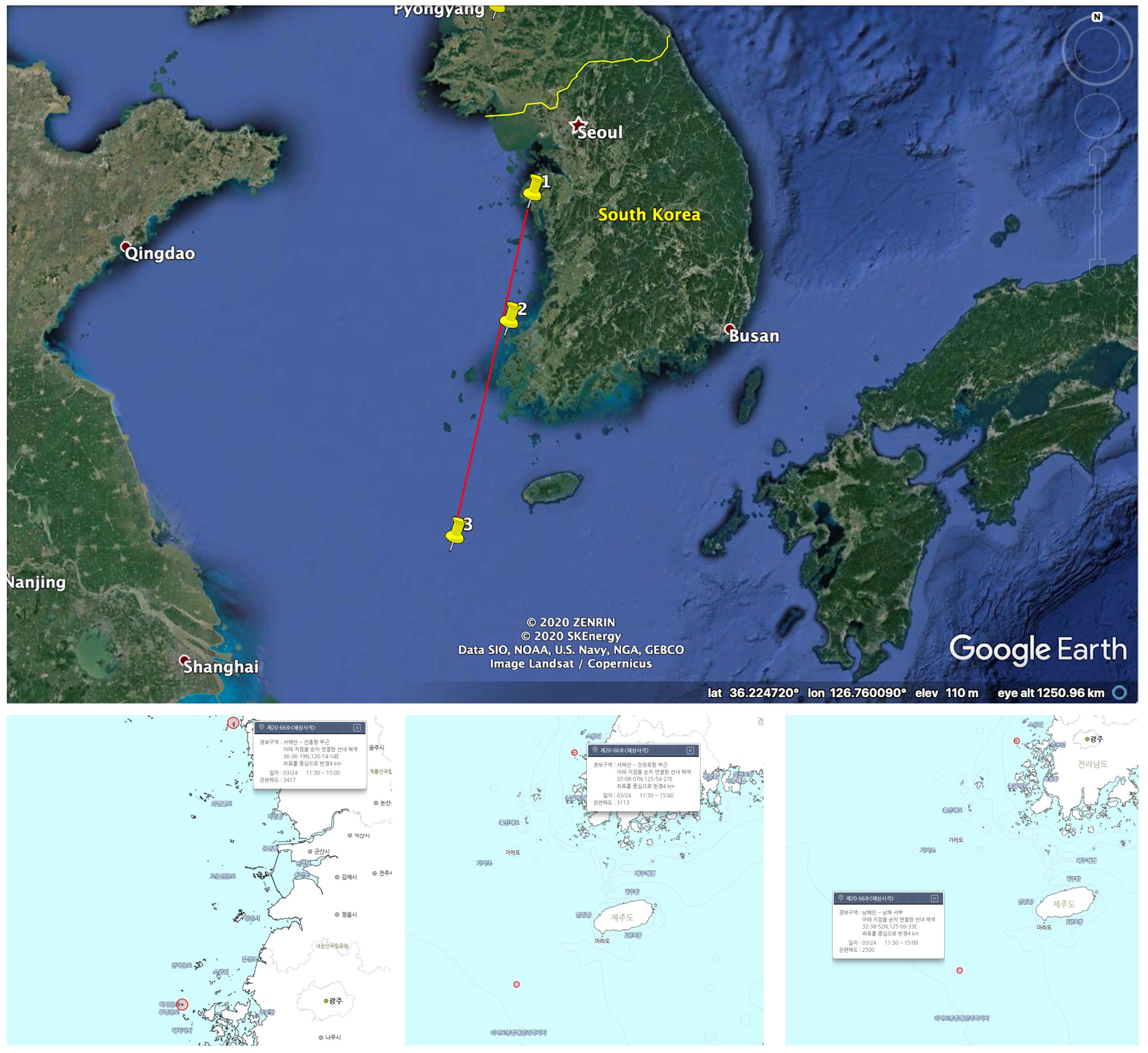 Second, commercial satellite images show vehicle traffic at the offshore launch site on March 24. It is possible to monitor activity at the launch pad using high-cadence 3m imagery from Planet Labs. Planet captured 20 images of the launch site in the month of March. Images on March 23 and March 24 show an object on the launch pad.

This image is a false-color image, showing the near-infrared band presented as red. Analysts use false color NIR images for a number of reasons. Objects that may appear to be the same color - such as foliage and camouflage - will often appear different colors in a false-colored NIR image. This is why the first near-infrared film was called "anti-camouflage film". The short wavelength of the NIR band is also less affected by atmospheric scattering, which slightly improves the resolution of the image.

Although it is difficult to identify the object visually, aspects of it strongly suggest that it is a missile launcher. First, the object is about ~15 meters long - that is the length of the five-axle launch vehicle previously associated with the Hyunmoo-2C and which we believe would be used for the Hyunmoo-4. Analysts at CNS have measured this vehicle using photogrammetry techniques. (The stated resolution of the image is 3m, so it is important to keep in mind that the object may be a few meters longer or shorter.)

The object exhibits a second characteristic that strongly suggests it is a missile launcher. The object is oriented precisely along the axis suggested by the navigational warnings. Missile launchers typically align themselves facing the direction the missile will travel. In other words, it is not a vehicle placed randomly on the pad, but rather one that is oriented in precisely the direction of the missile's path. 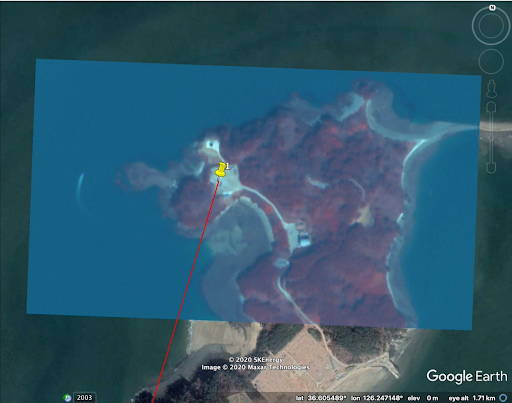 Together, the navigational warnings and satellite images help confirm the report that South Korea conducted a test of an 800 km-range missile on March 24, 2020 - even if the South Korea's government officials choose to "no comment" the event.

Of course, it would be even better to confirm that a launch had taken place. That's a capability we're trying to build in the open source community. Some analysts have used infrasound data provided by the CTBTO to detect missile launches. This method would provide further confirmation that a launch occurred.

This kind of work is extremely important to developing an accurate understanding of what appears to be a burgeoning missile race in Northeast Asia. Much of the information about North Korea's missile programs is released by South Korea or the United States. Both Washington and Seoul, however, are far more reluctant to publicize the development of new South Korean capabilities. This distorts our understanding of the dynamics at play. Open source information can help fill in the missing pieces, putting the arms race in Asia in its proper perspective.