State media of the Democratic People’s Republic of Korea (DPRK) reported on 6 January 2022 that the Academy of Defence Science had tested a hypersonic missile on 5 January 2022 (Figure 1).1 Below is an initial analysis based on available information. 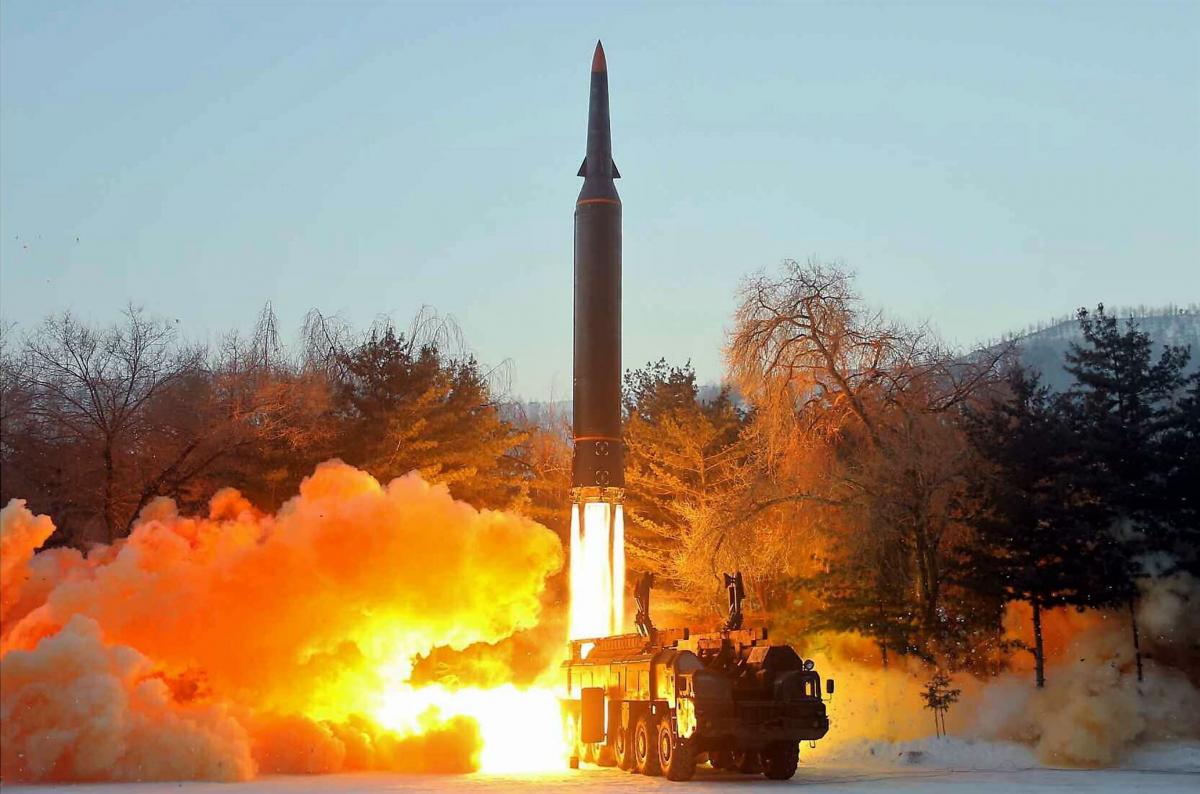 Given the similarities in the shape of the warhead and the length of the rocket stage, the recently tested missile may have been first revealed during the “Self-Defence-2021” weapon exhibition held in October 2021 (marked as Missile B in Figure 2).2 The missile seems to be shorter than the Hwasong-12 intermediate-range ballistic missile (also identified in Figure 2). 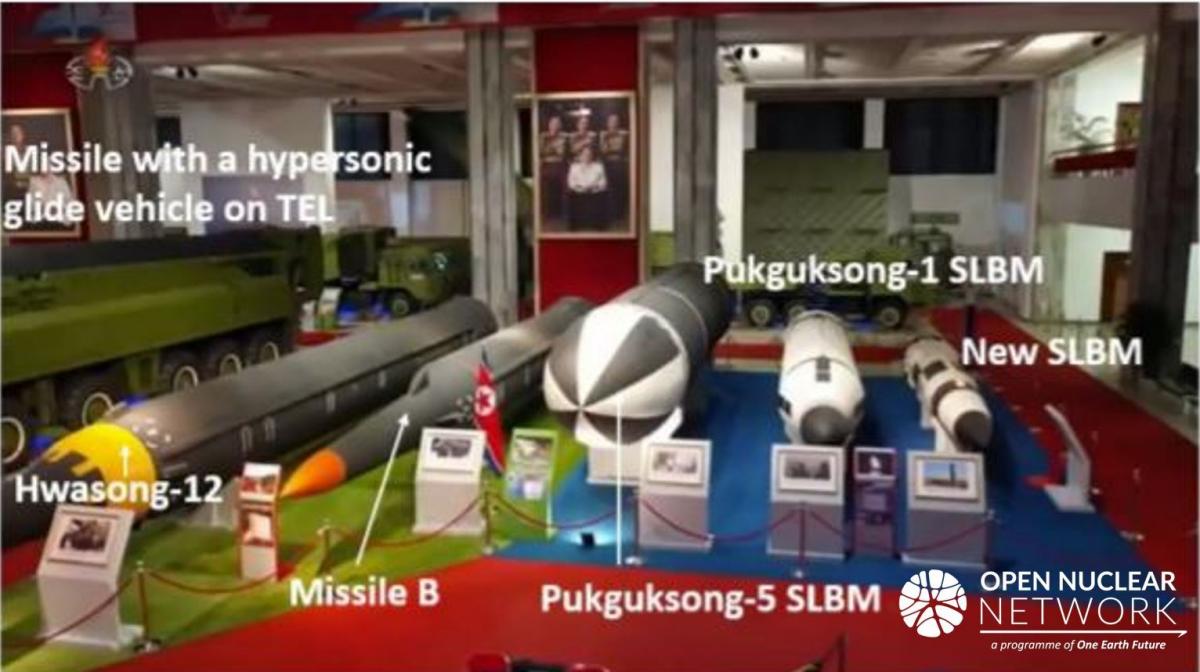 As is the Hwasong-12, the hypersonic missile is carried by a MAZ-547 transport-erector-launcher (TEL). As shown in Figure 3, the difference in length between the recently tested missile and the Hwasong-12 is also evidenced by the clips on the erection arms (which have been moved back to hold the shorter rocket stage) and the fact that the number of steps in the same section of the erection arm appears to have been reduced from 15 to 13 (Figure 3). 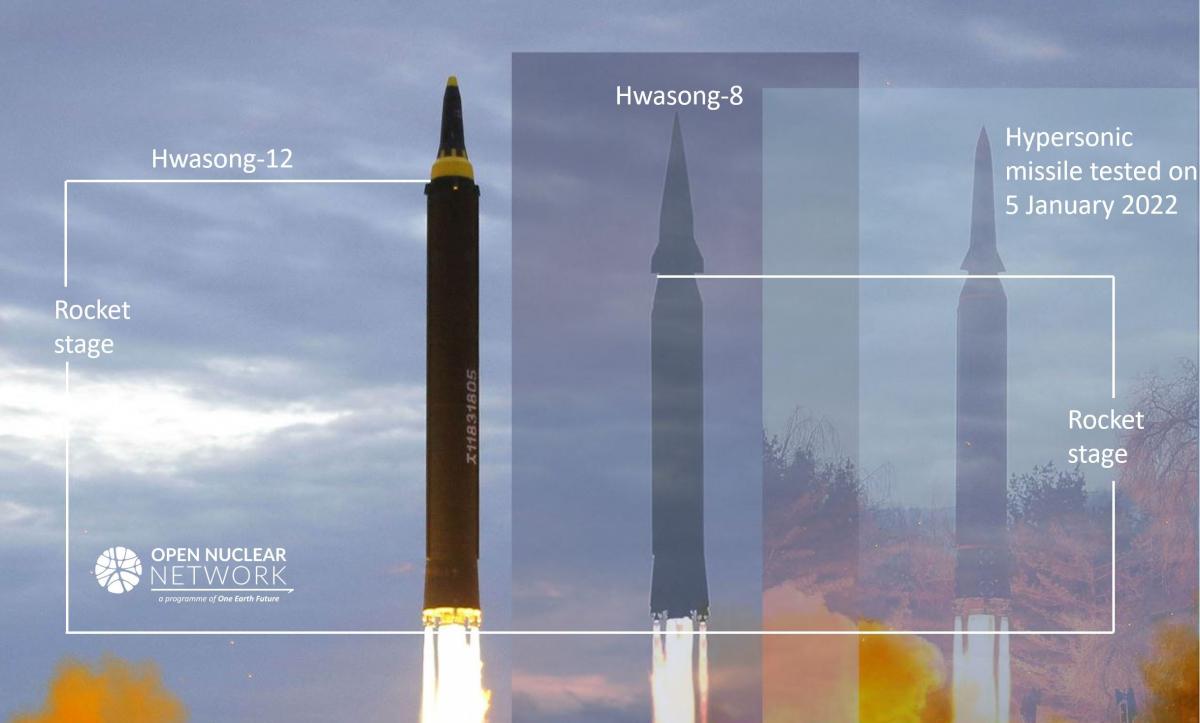 The warhead of the hypersonic missile tested on 5 January appears to be an evolution of the warhead of a precision strike variant of the SCUD-C/Hwasong-6 tested in May 2017.4 During the May 2017 test, the warhead fine-tuned its trajectory while flying a normal ballistic arc (Figure 5).

Figure 5: Warhead of a precision strike variant of the SCUD-C/Hwasong-6 (left) and its normal ballistic trajectory (right) shown during the test launch in May 2017.
Images: KCNA, KCTV

On 5 January 2022, the Japanese Ministry of Defense (MoD) stated that the flight distance of the missile was about 500 km if the missile flew a normal trajectory.5 DPRK State media claimed on 6 January that the missile hit a target 700 km away from the firing position after maneuvering “120 km from the initial launch azimuth to the target azimuth” (horizontal maneuvers) and carrying out multiple pull-up (vertical) maneuvers.6 Based on the DPRK’s announcement and using the Japanese MoD map, the approximate splash zone of the hypersonic glide vehicle is shown in Figure 6. The DPRK’s short-range submarine-launched ballistic missile tested on 19 October 2021 also reportedly performed horizontal maneuvers.7 In comparison, State media emphasized that the horizontal maneuvers during the 5 January 2022 test were “strong.”8 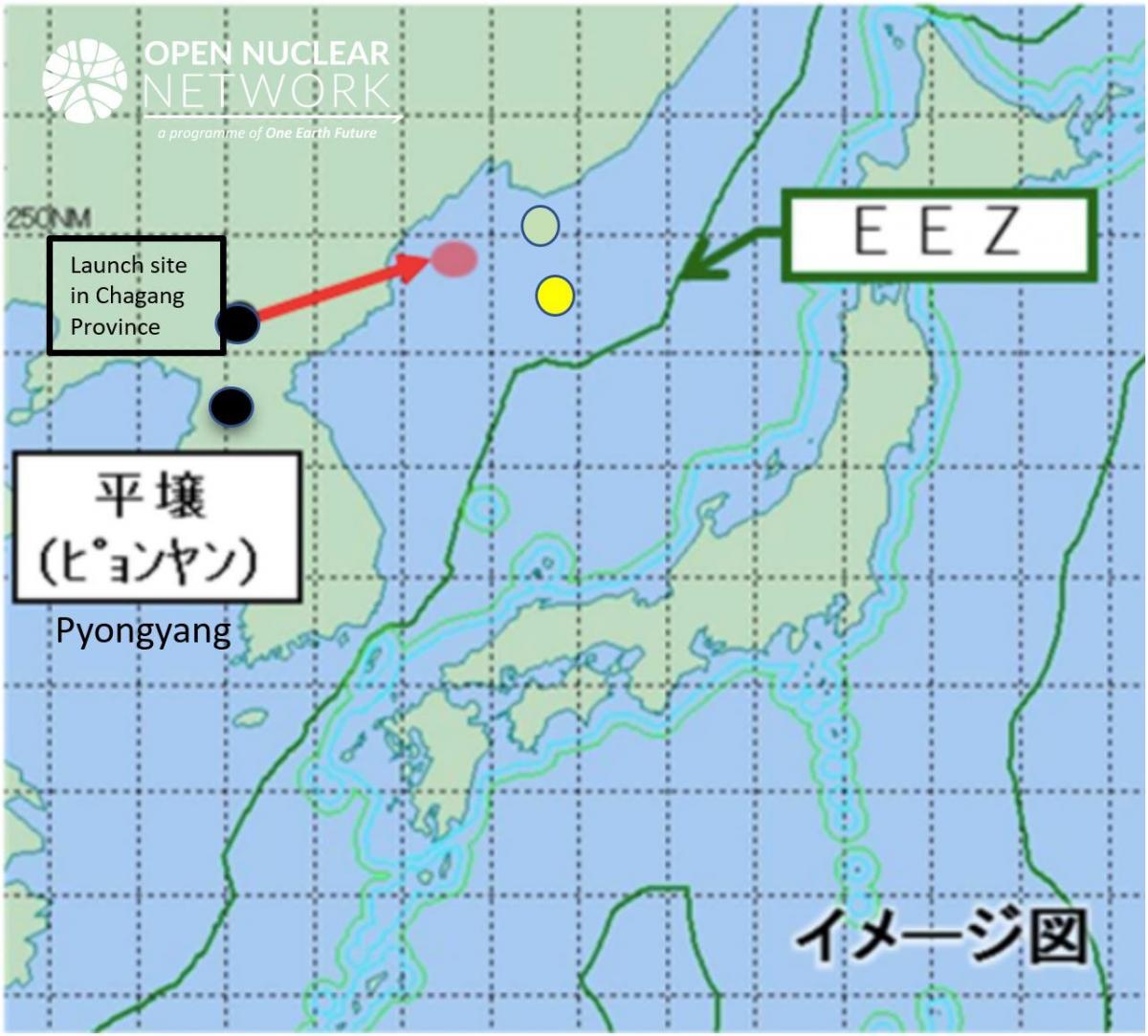 The initial announcement by the Japanese MoD and the report by DPRK State media suggest that the maneuvering capabilities of the hypersonic glide vehicle, especially the ability to stay below the radar’s line of sight, could potentially make detection and tracking by adversaries more difficult, thus posing greater challenges to missile defence. However, the MoD of the Republic of Korea (ROK) stated that the claim of the DPRK9 regarding the missile’s capabilities “appears to be exaggerated” and reiterated that the ROK military and its allies believed their combined assets were "capable of detecting and intercepting" the missiles of the DPRK. The MoD of the ROK further added that the missile tested on 5 January flew less than 700 km at a top speed of Mach 6 and at an altitude of below 50 km.10

As a shortened Hwasong-12 rocket stage is still relatively large, and considering that the DPRK already has single-stage, solid propellant hypersonic missiles that cover the range demonstrated in the recent test,11 both the Hwasong-8 tested in September 2021 and the hypersonic missile tested on 5 January 2022 may have not demonstrated their maximum ranges. It is unclear what the intended targets for these two hypersonic missiles are. It is possible that the medium-to-long term goal is to place hypersonic glide vehicles on standard Hwasong-12 stages. Such a missile concept was already displayed during the “Self-Defence-2021” weapon exhibition in Pyongyang.12

In its 6 January report, KCNA stated that “the reliability of fuel ampoule system under the winter weather conditions was also verified.”13 As mentioned in a previous ONN brief,14 in the Soviet Union “ampoulization” was normally associated with a transport-launch canister that was able to hold a fully fuelled missile in a combat-ready state for years. However, the DPRK’s hypersonic missile was not launched from a canister during the 5 January 2022 test. Thus, it is possible that the “ampoilization” in the DPRK context is only associated with the sealing and protection of the propellant tanks. Judging by the KCNA text, one may also expect another launch aimed to verify the operation of an ampoulized liquid-propellant ballistic missile on a hot summer day.

Pyongyang, January 6 (KCNA) -- The Academy of Defence Science of the DPRK test-fired a hypersonic missile on Wednesday.

Leading officials concerned of the Department of the Munitions Industry of the Central Committee of the Workers' Party of Korea and the sector of national defence science watched it.

The successive successes in the test launches in the hypersonic missile sector have strategic significance in that they hasten a task for modernizing strategic armed force of the state put forward at the 8th Party Congress and help fulfill the most important core task out of the five top priority tasks for the strategic arms sector in the five-year plan.

The Party Central Committee expressed great satisfaction at the result of the test-firing and extended warm congratulations to the relevant sector of the national defence science research.

In the test launch the academy reconfirmed the flight control and stability of the missile in the active-flight stage and assessed the performance of the new lateral movement technique applied to the detached hypersonic gliding warhead.

Having been detached after its launch, the missile made a 120 km lateral movement in the flight distance of the hypersonic gliding warhead from the initial launch azimuth to the target azimuth and precisely hit a set target 700 km away.

The reliability of fuel ampoule system under the winter weather conditions was also verified.

The test launch clearly demonstrated the control and stability of the hypersonic gliding warhead which combined the multi-stage gliding jump flight and the strong lateral movement.

[2] Xu Tianran, Brief on the Defence Development Exhibition of the Democratic People’s Republic of Korea, ONN, 20 October 2021, available at: https://oneearthfuture.org/research-analysis/brief-defence-development-exhibition-democratic-peoples-republic-korea

[7] “It clarified that the new type SLBM, into which lots of advanced control guidance technologies including flank mobility and gliding skip mobility are introduced, will greatly contribute to putting the defence technology of the country on a high level…”. Academy of Defence Science Succeeds in Test-Launch of New Type SLBM, KCNA, 20 October 2021

[12] Xu Tianran, Brief on the Defence Development Exhibition of the Democratic People’s Republic of Korea, ONN, 20 October 2021, available at: https://oneearthfuture.org/research-analysis/brief-defence-development-exhibition-democratic-peoples-republic-korea