Since late September, the Korean Peninsula has witnessed a new round of escalation of tensions. Coinciding with multiple joint and individual military exercises of the USA, ROK and Japan, the DPRK launched at least 30 ballistic missiles from 25 September to 14 November 2022 and fired artillery shells into the maritime buffer zone of the Comprehensive Military Agreement and/or around the Northern Limit Line (NLL, the de-facto maritime border between the two Koreas) on five occasions.

Between 25 September and 9 November 2022, the DPRK fired at least 30 ballistic missiles, including intermediate and intercontinental-range ballistic missiles (IRBM, ICBM), coinciding with multiple joint and individual military exercises conducted by the USA, ROK and Japan since 26 September 2022.

Shelling around the Northern Limit Line

In addition to one missile that reportedly landed south of the NLL on 2 November 2022, [1] the DPRK fired artillery shells into the maritime buffer zone of the Comprehensive Military Agreement and/or around the NLL on five occasions since early October. [2] The DPRK and the ROK also exchanged warning shots along the NLL on 24 October 2022. [3]

Responses from the USA and Allies

On 4 October 2022, ROK fighters dropped precision bombs on the Jikdo firing range (located on an ROK island in the Yellow Sea) in a demonstration of power. [4] Similarly, on 5 October 2022, the ROK and the US fired short-range ballistic missiles (SRBMs) into the East Sea (Sea of Japan). [5] The US and the ROK also extended by one day their five-day Vigilant Storm exercise, which was originally scheduled to end on 4 November 2022. [6]

Shelling around the NLL has particular potential to trigger further escalation, as evidenced by a number of inter-Korean military incidents that have taken place in this contested area, for example the Battle of Yeonpyeong in 2002, the sinking of the South Korean corvette Cheonan in 2010, and the shelling of Yeonpyeong also in 2010. That said, on 7 November 2022, a "report" by the General Staff of the DPRK's Korean People's Army (KPA) summarized its recent military activities, saying it "will continue to correspond to all the anti-DPRK war drills of the enemy," implying the KPA's counteractions have fully met their intended purposes for the time being.

The unusually heightened level of DPRK reaction to US-ROK joint military drills in recent weeks is consistent with "the Party's invariable fighting principle of power for power," which Kim Jong Un first mentioned during the Eighth Party Congress. [7] The DPRK's recent spate of military activities may also be viewed in the broader context of its pivot to China and Russia and a possibly larger shift in its US policy since the invasion of Ukraine. [8]

The 7 November 2022, KPA General Staff "report" suggests the DPRK will suspend its military activities as long as there are no further major US-ROK joint military drills. Nevertheless, the situation in the region could still evolve in several different ways, including, but not limited to, the following:

COMPILATION OF DATA ON DPRK MILITARY ACTIVITIES, AS REPORTED BY ROK, DPRK AND JAPAN

ONN has compiled information on DPRK military activities since 25 September 2022. The last two columns of this table are based on the information kindly shared with ONN by Michael Madden and his colleagues at the Stimson Center. 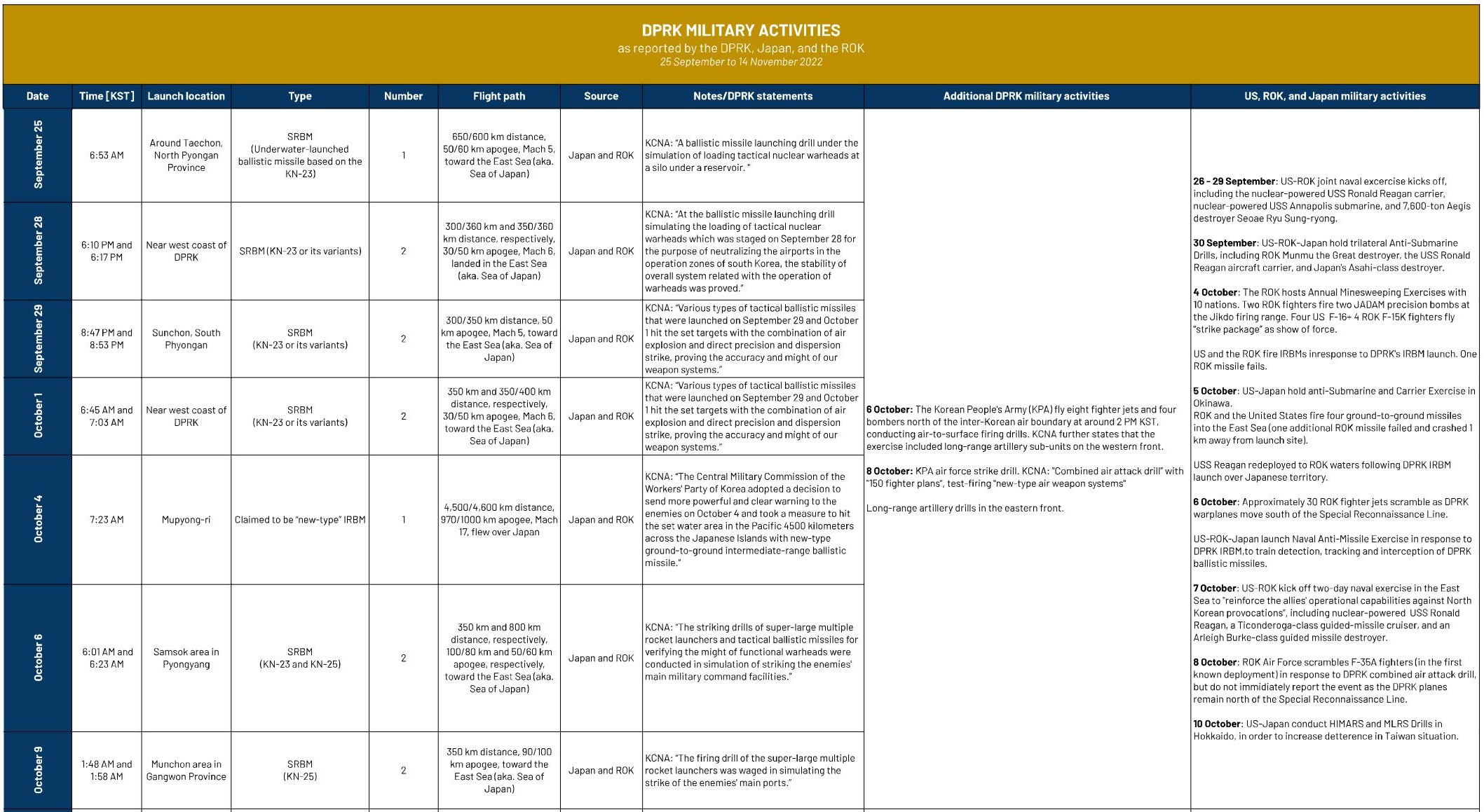 EXAMINATION OF PHOTOS RELEASED BY THE DPRK AND THE ROK

The DPRK launched an IRBM on 4 October 2022, which reportedly flew ~4,500 km with an apogee of ~1,000 km. This is the fifth confirmed IRBM launch, the second this year, and the third to overfly Japan. The DPRK claimed that, instead of the Hwasong-12 IRBM, it used a "new-type ground-to-ground intermediate-range ballistic missile" for this launch. Based on available images, it is difficult to determine what mechanism was applied for the attitude control of the missile (Figure 1). The bottom of this "new-type" IRBM looks too rounded and smooth for a liquid propellant ballistic missile of this type (Figure 1), indicating that image manipulation may have been involved. [1] 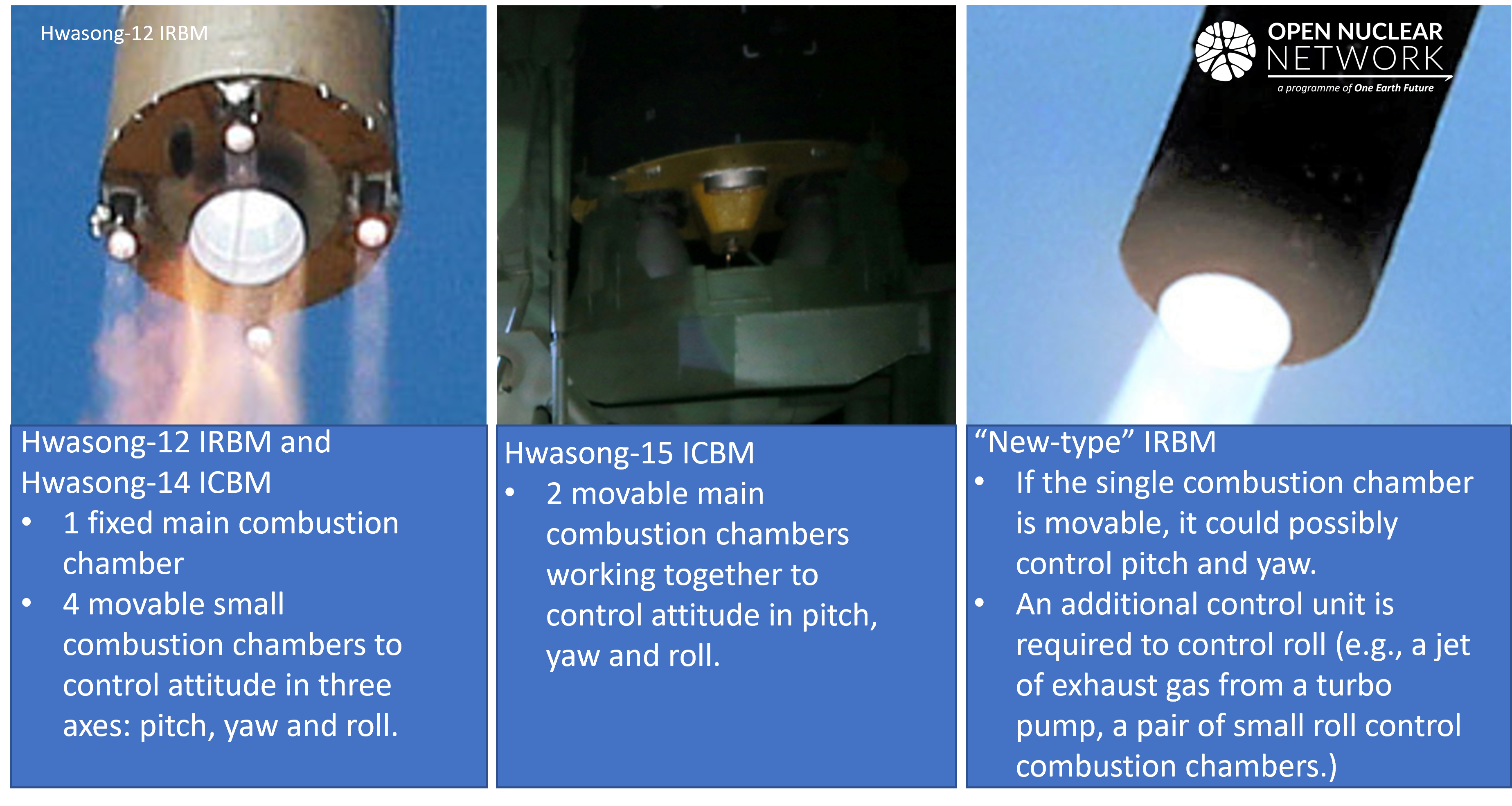 The DPRK also launched two "long-range strategic cruise missiles" on 12 October 2022. However, The DPRK might have used a previously unpublished photo from a cruise missile test in September 2021 in its reporting on the 12 October 2022 cruise missile launch event. Note the shape of the dust clouds in Figure 2 are consistent, a strong indicator that the two photos may have been taken from the same event. The DPRK also claimed it launched another two such missiles on 2 November 2022. The ROK disputed this claim, saying the launch did not take place. [3] 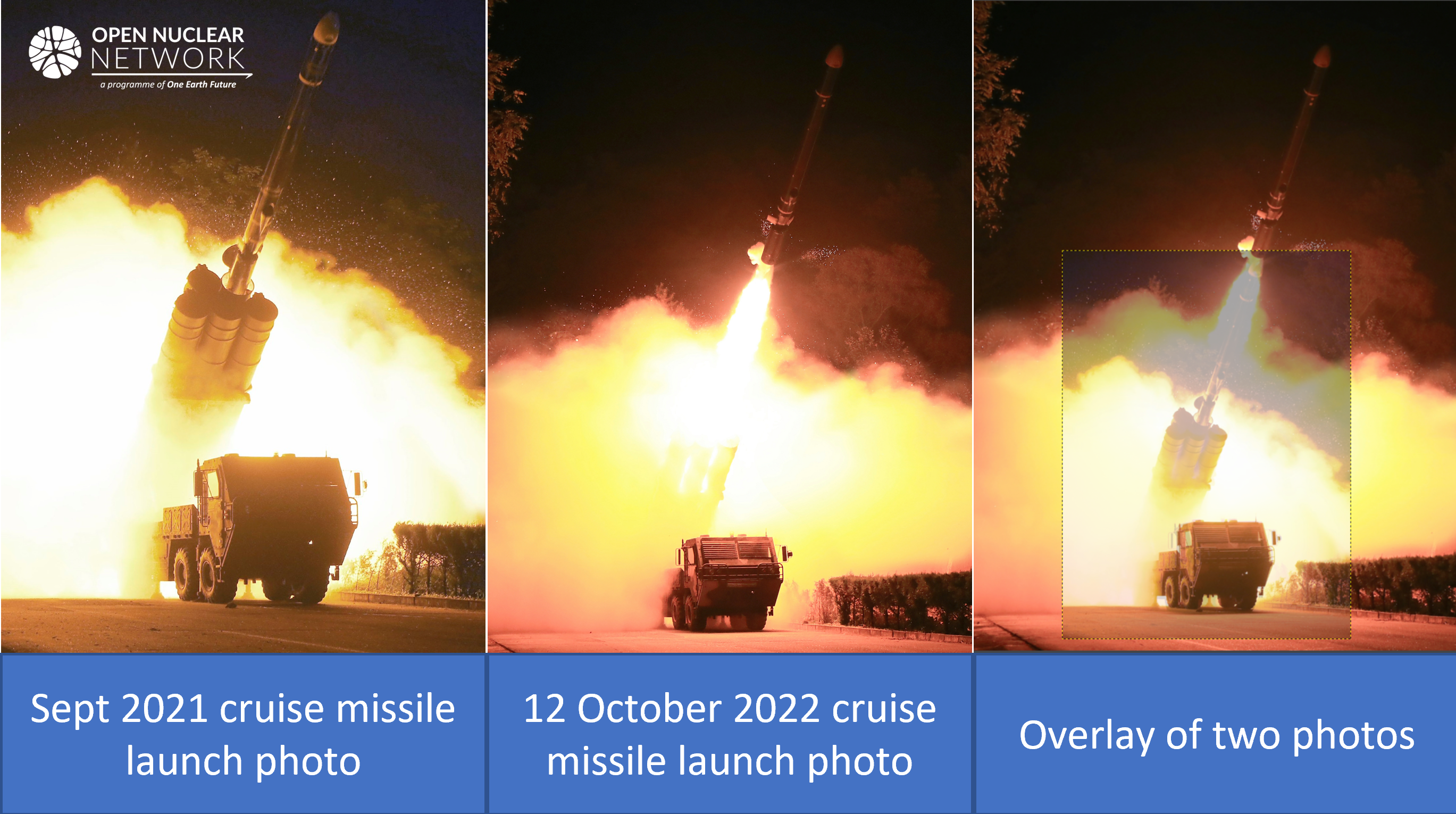 The photo album published by the DPRK covering its 2 to 5 November 2022 launch campaign [4] contains a photo of a small ballistic missile that was first publicly revealed in April 2022. [5] However, a comparison of the launch photos indicates that the DPRK re-used an old photo from April 2022 in its report covering its 2 to 5 November 2022 launch campaign (Figure 3), reducing the credibility of the DPRK's announcement. 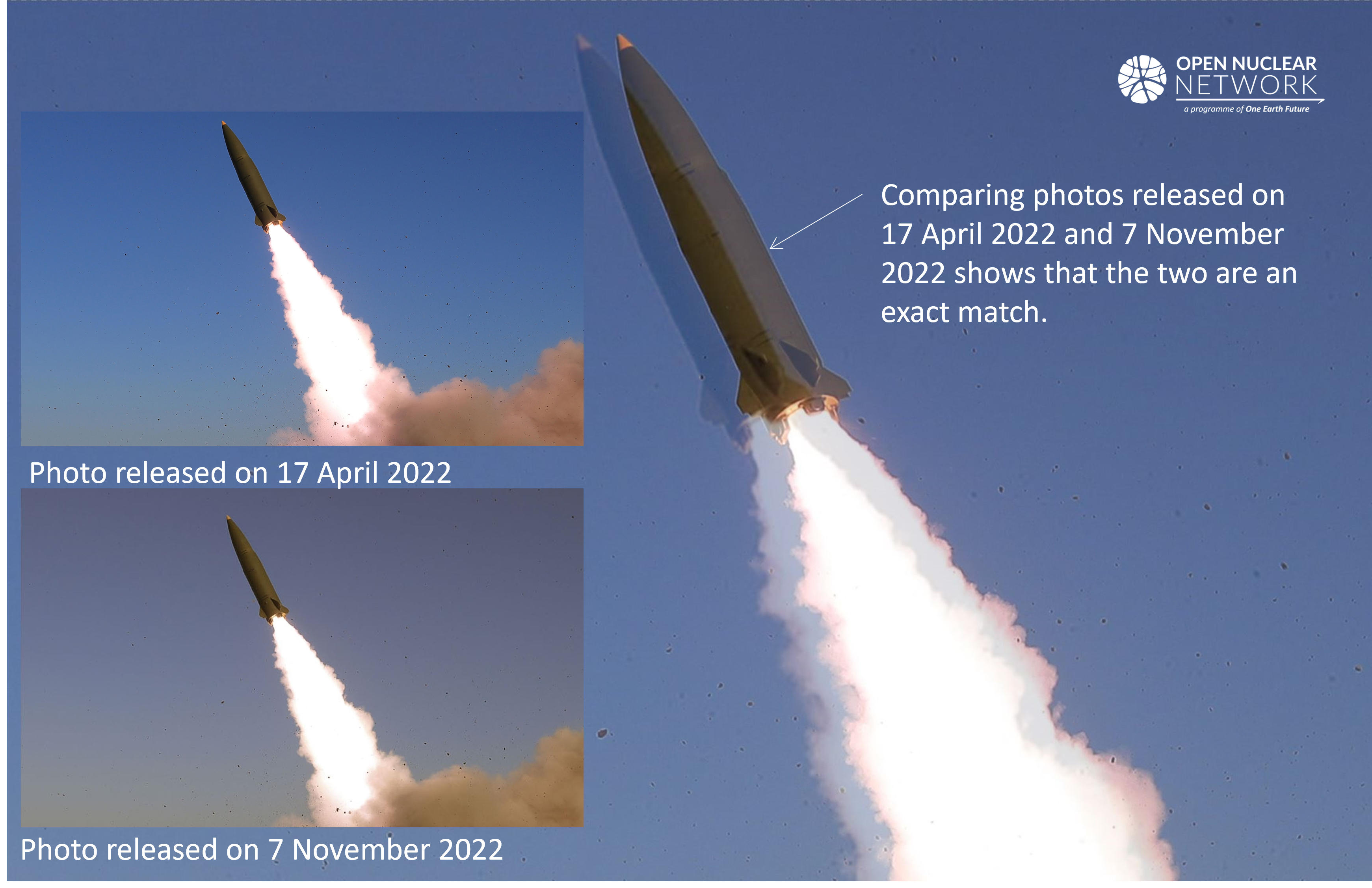 The DPRK described its allegedly failed ICBM launch on 3 November 2022 as "a ballistic missile to paralyze enemy operation command systems". According to the image released by the DPRK on 9 November 2022, the missile appears to be a shortened and modified Hwasong-15 ICBM (Figure 4); however, there is not sufficient evidence at this time to make any confident conclusions. The ROK previously assessed the 3 November 2022 ICBM to be a Hwasong-17 and has not updated its assessment since then. 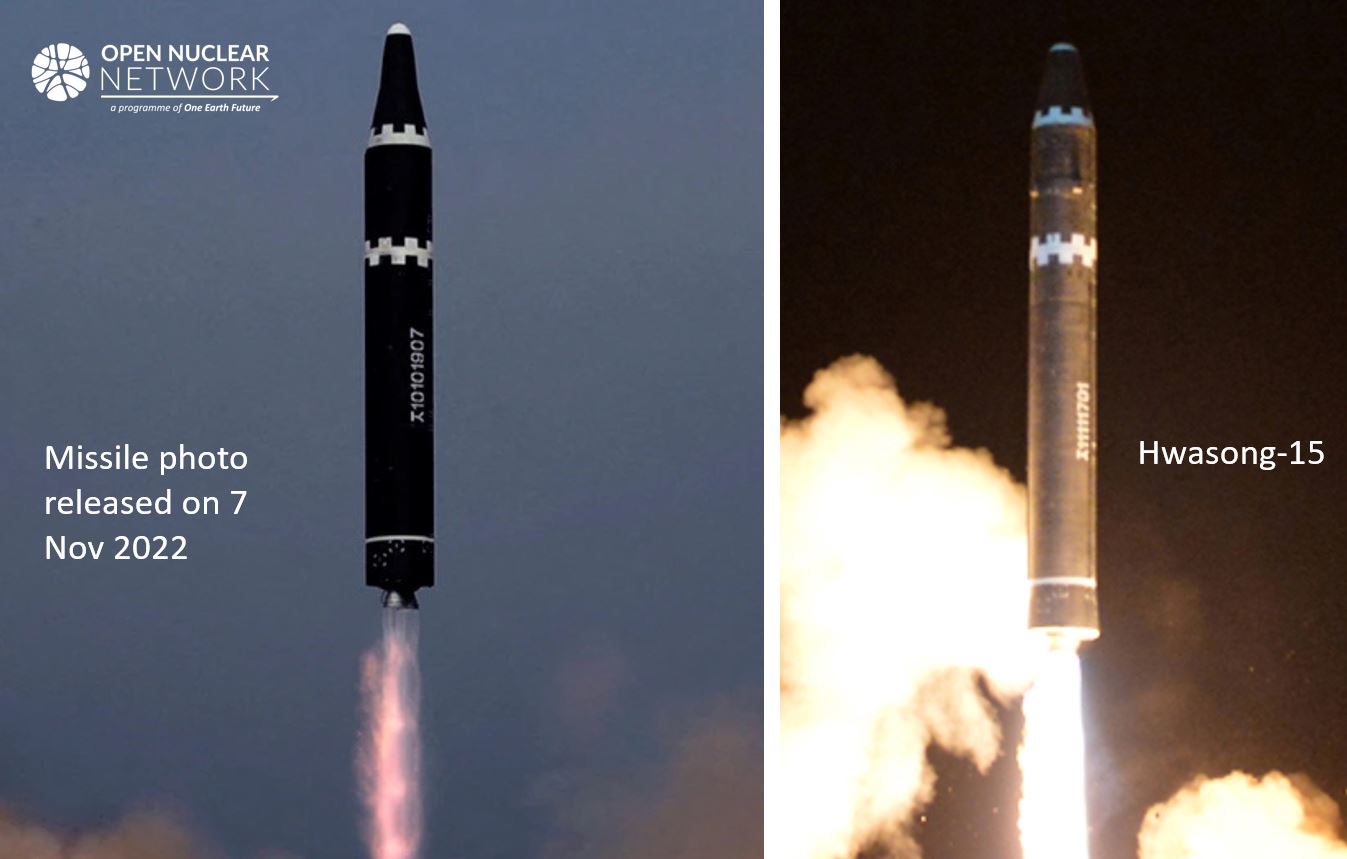 Figure 4. Comparison between the ballistic missile photo released on 7 November 2022 and the photo of Hwasong-15 ICBM launched in 2017 (right). Images: KCNA

The ROK military stated that the missile fired by the DPRK that landed south of the NLL (Figure 5) on 2 November 2022 was an SA-5 (Soviet S-200) surface-to-air missile (SAM). [6] According to the ROK military, instead of performing manoeuvres to hit a moving aerial target, this missile followed a standard ballistic trajectory. [7] This statement suggests that the DPRK may have converted obsolete SAMs into ballistic missiles. While the DPRK still referred to them as SAMs, the ROK may have assessed them as SRBMs on the basis of their ballistic trajectories.

Figure 5. The ROK has salvaged debris of at least one SA-5 SAM from the sea. Images: KCNA, Yonhap News TV (right). [8]