The 8th Congress of the Workers’ Party of Korea of the Democratic People’s Republic of Korea was held in Pyongyang from 5 to 12 January 2021. This paper provides an overview of the structural and personnel changes that resulted from the 8th Congress and analyses their implications for the leadership’s governance style in the coming years.

Revision of the WPK Rules

The WPK Rules set forth the basic rules for structure and membership of the WPK, as well as the principles under which the Central Committee of the Party operates. They also guide all political institutions overseeing political, economic and military affairs of the Democratic People's Republic of Korea (DPRK). For 30 years, there were no amendments to the Rules. This changed in 2010: since 2010, the Rules have been amended at every WPK Congress and Conference. [1]

In state affairs, the WPK Rules have a higher standing than the country's constitution. [2] This is because of the centralised role of the Party in state governance, which was further strengthened by the revisions in 2010. As such, revisions can provide important indications not just of changes in the Party's structure and leadership, but also of major changes in principles of governance and the ideological framework guiding the WPK's work. The following table summarizes key changes to the WPK rules since 2010. 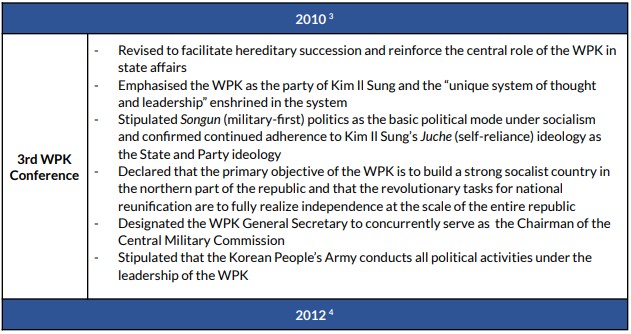 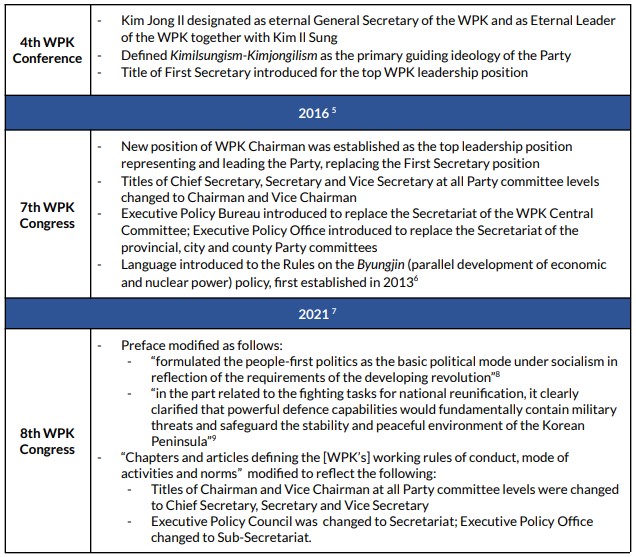 In addition, the amendments involve two major revisions to the ideological framework in the preface to the Rules. The first of these revisions was to state that "the people-first politics [serves] as the basic political mode under socialism in reflection of the requirements of the developing revolution." [12] Amidst the current domestic difficulties due to the impact of sanctions, the global pandemic and major natural disasters, the "people-first" principle has been one of the major themes in national propaganda and Kim Jong Un's stated efforts to do more for the common people. First articulated publicly in 2013, 13 this year's revision of the Rules further formalized the principle and appeared to replace the Songun politics of the Kim Jong Il era as the Party's "basic political mode under socialism". The newer ideological principle is now more firmly associated with the Kim Jong Un era, which further supports the full transition of Kim Jong Un to a leader of the same measure as his predecessors.

The second revision was to that part of the preface referring to "tasks of national reunification", apparently to highlight the role of "powerful defence capabilities [which] fundamentally contain military threats and safeguard the stability and peaceful environment of the Korean Peninsula." [14] It is possible that expressions along the lines of wanting to achieve national liberation and independence of the entire peninsula are subordinated to more accurately reflect the enduring state of separation between North and South Korea and a military standoff relationship.

Also notable are the extensive changes to the "chapters and articles defining the [WPK's] working rules of conduct, mode of activities and norms," [15] in particular, the return to a Secretariat system, a further empowered Political Bureau and a more streamlined Central Committee structure following the integration of the Inspection Commission into the Central Auditing Commission. 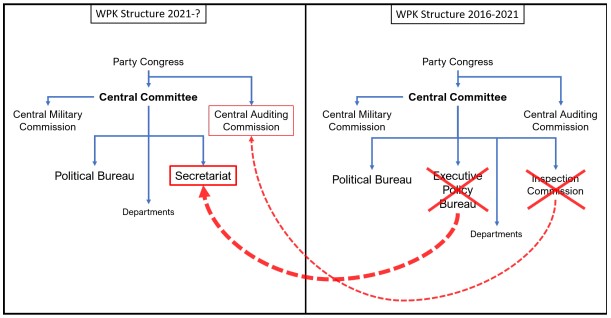 The reintroduction of the Secretariat also allowed for a change in title for Kim Jong Un. All three of the DPRK's leaders have held variants of a "Secretary" title to describe their top leadership position in the Party. Both Kim Il Sung and Kim Jong Il were bestowed the title of "eternal General Secretary". Until 2016, Kim Jong Un was referred to as First Secretary of the WPK. Revisions to the WPK Rules in 2016 had the effect of changing his title from First Secretary to Chairman of the WPK. The 2021 revisions mark a return to the titular system that existed up until 2016 (i.e. "General Secretary"). Reversion to the previously used title suggests an intention to allow for a dignified process through which Kim Jong Un was able to demonstrate leadership that was deserving of the same or similar titular honour as the one bestowed on his father and grandfather, further solidifying Kim Jong Un's sole governing authority.

Personnel changes in the WPK during the 8th Congress were similarly extensive. Around 41% of the Political Bureau was replaced, with 12 entirely new members. The number of individuals with an economic profile has increased from four to seven, while the number for those with a military profile has slightly decreased from seven to six. The possibly elevated role of economic officials amidst severe strains to the DPRK's economy would not be surprising. Noteworthy among the changes is the omission of Pak Pong Ju (possibly due to retirement given that he is in his early 80s) and the promotion to the Presidium of the Political Bureau of trusted advisor Jo Yong Won who has accompanied Kim Jong Un frequently in recent times. 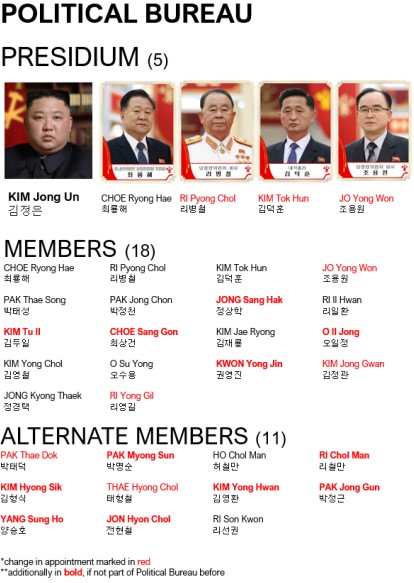 New promotions, particularly those of Jo Yong Won, Ri Pyong Chol and Kim Tok Hun, reflect their already established status as among those closest to and most trusted by Kim Jong Un, as suggested by the number of times these officials have accompanied him to public activities in the past two years. 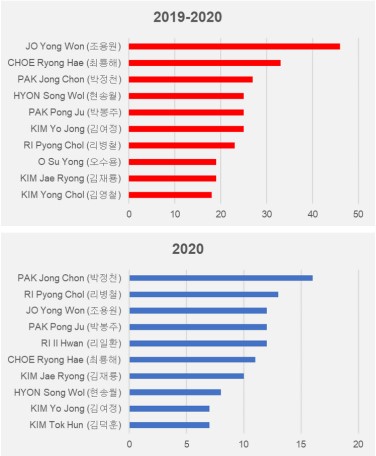 The composition of the Secretariat (formerly the Executive Policy Bureau), which is responsible for overseeing implementation of the policies decided by the Political Bureau, suggests a more focused approach to providing operational guidance following the structural revision. Membership was reduced from ten to seven; their respective positions and backgrounds suggest a clear division of responsibilities and a focus on (1) internal discipline, (2) military and science, and (3) the economy. 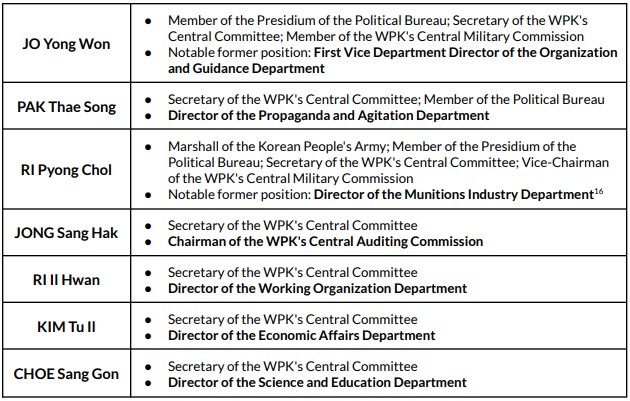 Prominent figures who have previously been considered as key foreign and security policy officials appear to have been mostly omitted in the reshuffle. The information released so far, for example, suggests that no member has been selected for the Secretariat who is in charge of international affairs, as previously was the case. It also remains unclear what to make of Kim Yo Jong’s nominal title, as well as her formal and informal roles and status in the leadership, though she has been omitted in the reshuffle this round. [17] Also notable is the apparent demotion of Choe Son Hui, First Vice Minister of Foreign Affairs, from Member to Alternate Member of the WPK Central Committee. Kim Yong Chol has kept his position as Member of the Political Bureau and Foreign Minister Ri Son Kwon has also kept his position as Alternate Member. Only Ri Pyong Chol stands out with the promotion to the Presidium of the Political Bureau and continued membership in the Secretariat. This appears to be in line with the newly stated ambitious development goals for the country’s nuclear weapons programme and does not stand in contradiction to a relative shift towards primarily domestic affairs in terms of personnel appointments. [18]

The structural and personnel changes in the WPK that resulted from the 8th Congress appear to have been intended to further solidify Kim Jong Un's sole governing authority and arguably completed the transition period following his ascent to leadership in 2011. Revisions to the WPK Rules had the effect of establishing ideological nuances unique to the Kim Jong Un era; the return to the Secretariat system and the election of Kim Jong Un as General Secretary support this hypothesis. The leadership also promoted officials who are considered closest to and most trusted by Kim Jong Un. The new Political Bureau and Secretariat composition further suggests that a deliberate focus is being placed on governance over primarily domestic affairs, which is in line with the dominant focus on the economy and military development goals in Kim Jong Un's report to the 8th WPK Congress.

Presidium of the Political Bureau of the Party Central Committee

Secretariat of the Party Central Committee

Rodong Sinmun, the organ of the Party Central Committee

Members and alternate members of the Central Committee of the Workers' Party of Korea (WPK) elected at the 8th WPK Congress: [20]

Members of the WPK Central Committee

[2] Article 11 of the DPRK's Constitution states: "The DPRK shall conduct all activities under the leadership of the Workers' Party of Korea."

[11] According to the official announcement, the WPK Central Committee "modified and supplemented some contents of the Party Rules in line with the development and principle of the Party work to meet the requirements of the developing revolution and corresponding to the new fighting tasks facing the Party" (WPK Rules Revised at 8th Congress of WPK, KCNA, 10 January 2021). This stated objective also reflects the contents of the key policy report made by Kim Jong Un one day prior on 8 January 2021. Though the actual text of the report is not made public, part four ("For Development of Party Work") is described as focusing on "tasks and ways for bringing about radical innovation in the Party work in line with the present situation, in which the Korean revolution has entered the period of new development and leap." It is further reported that the "first task is to attach primary importance to establishing the monolithic leadership system and further develop it." (Great Programme for Struggle Leading Korean-style Socialist Construction to Fresh Victory - On Report Made by Supreme Leader Kim Jong Un at Eighth Congress of WPK, KCNA, 9 January 2021)

[13] "Kimilsungism-Kimjongilism is, in essence, the people-first doctrine and a person who worships the people as God and works devotedly for them is just a genuine Kimilsungist-Kimjongilist." (Kim Jong Un Delivers Address at the Fourth Conference of Cell Secretaries of the Workers' Party of Korea, KCNA, 30 January 2013)

[17] While Kim Yo Jong is not featured in the new Political Bureau, she had a prominent seat during the plenum of the Presidium of the WPK Congress and was present throughout the proceedings. She also authored a KCNA piece condemning South Korean intelligence efforts for focussing on military parade preparations (Statement of Vice Department Director of WPK Central Committee Kim Yo Jong Issued, KCNA, 13 January 2021). Also notable about the piece is an apparent change in title from First Vice Department Director (제1부부장) to Vice Department Director (부부장) of the WPK Central Committee. Further information will be required to ascertain both her formal and informal role following the reshuffle.

[18] He was only last year promoted to Marshal of the Korean People's Army and appears to play a key role in overseeing the development of the DPRK's nuclear weapons and missile programmes. (Title of KPA Marshal Conferred in DPRK, KCNA, 6 October 2020)