1. The Democratic People's Republic of Korea (DPRK) operates a relatively large number of Type 033 submarines, which were imported from China or built locally with Chinese assistance (Type 033 is a Chinese variant of the Soviet Romeo class submarine). The DPRK has been developing at least one ballistic missile submarine by converting one of these Type 033 submarines.

2. Intelligence sources from the Republic of Korea (ROK) stated that the Type 033 submarine being converted into a ballistic missile submarine has reached a displacement of 3000 tons. However, as of now publicly available images could not support this assessment.

3. Despite the fact that the Type 033 submarines have become outdated, the deployment of a Type 033-based ballistic missile submarine would improve the DPRK's ability to engage in sudden nuclear attacks and increase the survivability of its mid-range ballistic missiles.

5. The DPRK has test fired and displayed four types of mid-range SLBMs. The number of flight tests is low. It is possible that the four types of SLBMs are all prototype designs representing incremental improvements.

6. ROK intelligence sources also stated that the DPRK is working on the construction of a third type of submarine, this one with a displacement of 4000 to 5000 tons. The relationship between this submarine and the DPRK's plan to build nuclear-powered submarines is also unclear at this point but, given the stated displacement, they could be related.

According to available open source information, the DPRK appears to have been developing at least two types of ballistic missile submarines. They are:

On 22 July 2019, DPRK leader Kim Jong Un inspected a Type 033 submarine [2] that was apparently undergoing conversion to accommodate possibly two to three SLBMs in its enlarged sail. [3] During the 8th Korean Workers’ Party Congress in January 2021, Kim Jong Un stated that the remodelling of a mid-sized submarine had been successful:

"The DPRK is estimated to possess around 21 Type 033 submarines, 12 of which were assembled in the DPRK with Chinese assistance. In February 1973, China’s Jiangnan Shipyard shipped out the first batch of submarine parts to the DPRK. In 1976, the first three of these submarines were completed. The twelfth such submarine was completed in 1979. Under this military assistance project (referred to in China as Project Number 13), 107 North Koreans were trained at Jiangnan Shipyard for six months in 1973, while 244 Chinese technicians and workers were sent to the DPRK to provide guidance between 1973 and 1978."

Currently, the operational status of the Type 033 submarine fleet is unclear, although some have reportedly played a part in military drills in recent years (e.g. 2014 and 2017). [5] In August 2020, the UN Panel of Experts reported that a construction hall at the Sinpo South Shipyard was large enough to concurrently convert three Type 033 submarines into possible ballistic missile submarines. [6] 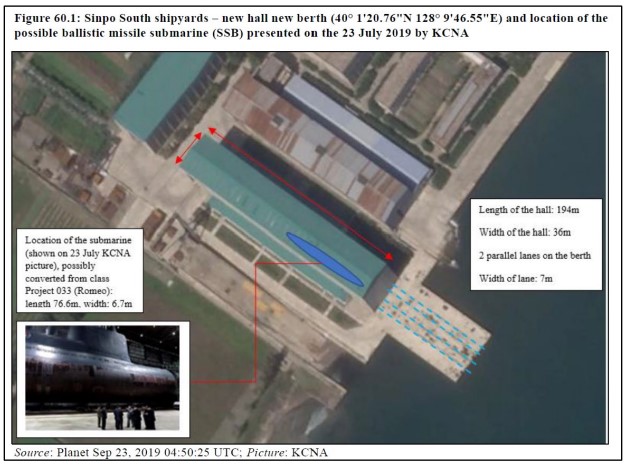 According to the Yonhap News Agency, military and intelligence authorities of the ROK assessed that the Type 033-based ballistic missile submarine has reached a displacement of 3000 tons. [7]

However, the dimensions of the DPRK's "3000 ton" ballistic submarine as assessed by the ROK authorities (~80 meters long and ~7 meters wide) are in accordance with a standard Type 033 submarine, which has a submerged displacement of only 1830 tons. [8] According to available photos released by the DPRK State media, the DPRK did not cut and subsequently insert any new sections into the Type 033 submarine. Thus, it remains to be seen if a Type 033 submarine could reach 3000 tons of displacement by enlarging its sail alone.

As a point of reference, the Soviet Golf class ballistic submarines, with a submerged displacement of 3000 tons, [9] are considerably larger than the Type 033 submarines (see photo below). [10] 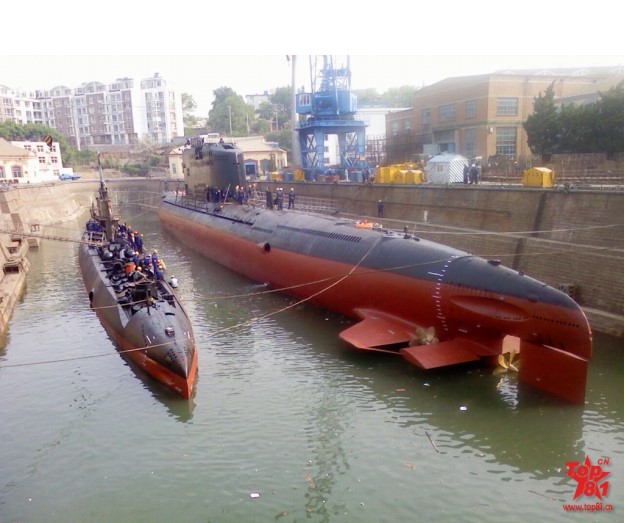 A smaller, experimental ballistic missile submarine was used by the DPRK for a test launch of the SLBM Pukguksong-1 in 2016. [14] It first appeared in commercial satellite images in late 2014. This submarine is often referred to as "Sinpo-B class", "Gorae class" or "Sinpo class". 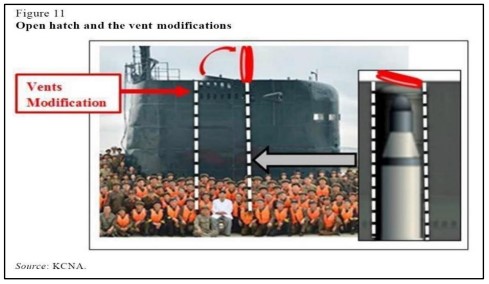 The experimental submarine is estimated to have only one launch tube. Source: The United Nations, S/2017/150, p. 21

During the 8th Korean Workers' Party Congress in January 2021, Kim Jong Un also stated that the design of a nuclear-powered submarine was in the final stage. He went on to imply that this submarine might be able to accommodate SLBMs with intercontinental range:

"The report made public with pride … that the design of [a] new nuclear-powered submarine was researched and was in the stage of final examination … . And the tasks were brought up to ... push ahead with the development of solid-fuel enginepropelled inter-continental underwater and ground ballistic rockets as scheduled, and possess a nuclear-powered submarine and an underwater-launch nuclear strategic weapon which will be of great importance in raising the long-range nuclear striking capability … ."

As of this writing, all known SLBMs of the DPRK belong to the Pukguksong series of solid fuel, two stage, mid-range ballistic missiles: 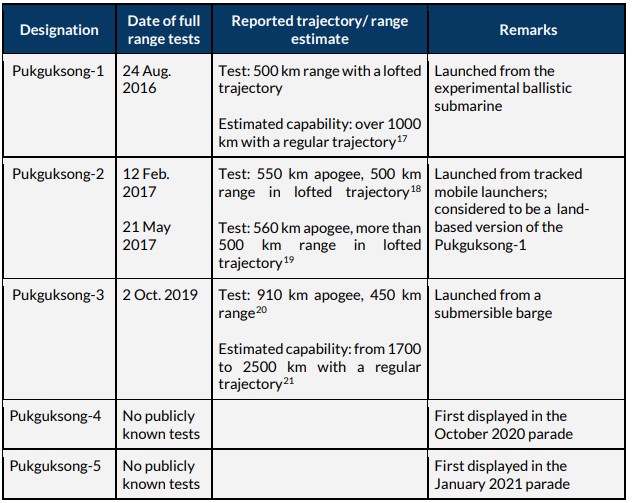 As can be seen from the table, there have only been a few flight tests of the Pukguksong series ballistic missiles. It is uncommon for a State to develop four types of SLBMs within several years. It is possible that the Pukguksong-1, 3, 4 and 5 represent an incremental improvement that would eventually lead to one standardized mid-range SLBM.

[4] 安野 (An Ye), 中国江南造船厂援外军事项目回顾 [Reviewing military assistance of the Jiangnan Shipyard], Naval & Merchant Ships, 2006, available at: http://mil.news.sina.com.cn/p/2006-01-23/0725346203.html. The Naval and Merchant Ships is a monthly publication under the supervision of the China State Shipbuilding Corporation.