In light of recent analyses about a possible next nuclear weapon test by the DPRK [1], ONN has compiled data related to each of the six previous nuclear weapon tests of the DPRK, specifically the timing of the previous tests, nuclear test site preparations, launch vehicle development, environmental factors and the political context. These factors may assist in assessing when a next test might take place. It should be noted, however, that there may be other relevant factors that cannot be fully understood from open sources (e.g. the intentions of Kim Jong Un).

The DPRK’s timing of nuclear tests seems to be correlated with its launch vehicle development programme schedule - five of the previous six nuclear tests were undertaken within three months of a long-range rocket or satellite launch. Conversely, the longest span of time separating a launch from a nuclear test was a failed test in April 2012, which was just over ten months before the third nuclear test (2013).

In two of the six previous nuclear tests, the first test (2006) and the third test (2013), explicit comments were made by the DPRK leadership in the weeks prior to the tests clearly indicating its intention to perform a nuclear test. No similarly explicit statements were identified as having been made in the leadup to the other nuclear tests.

None of the DPRK's previous nuclear tests, or intercontinental ballistic missile (ICBM) or satellite launches, were conducted in June or August. [4] The inactivity in June is assessed as likely related to state-wide manpower-intensive agricultural projects, which may require the mobilization of the military during the rice transplantation season between mid-May and mid-June. [v] With respect to August, heavy rainfall could potentially damage the nuclear test site and impact test operations.

The second nuclear test (2009) took place while then-DPRK leader Kim Jong Il's health was deteriorating and the DPRK was in a transition period. 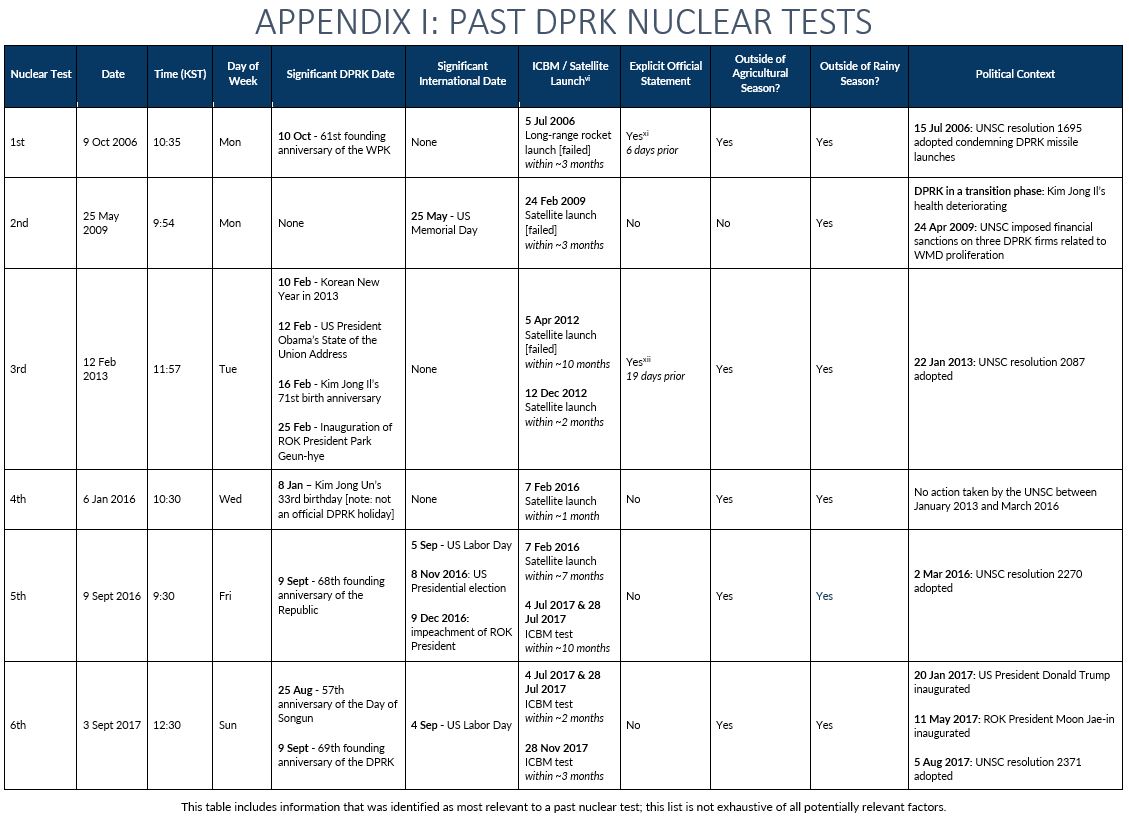 [vi] This list includes all known DPRK ICBM/satellite launches through December 2021. The list does not include the DPRK's 1998 attempted launch of its first satellite using a small carrier rocket, as the vehicle had little potential for use as a long-range rocket.

[vii] The Foreign Ministry issued a statement asserting that Pyongyang "will in the future conduct a nuclear test." DPRK Confirms to Conduct Nuclear Test in the Future, China.org.cn, 4 October 2006, available at: http://www.china.org.cn/international/2006-10/04/content_1182923.htm

[viii] The DPRK National Defence Commission stated: "We do not hide that a variety of satellites and long-range rockets which will be launched by the DPRK one after another and a nuclear test of higher level which will be carried out by it in the upcoming all-out action, a new phase of the anti-U.S. struggle that has lasted century after century, will target against the U.S., the sworn enemy of the Korean people … ." Ju-min Park, Choonsik Yoo, North Korea to target U.S. with nuclear, rocket tests, Reuters, 24 January 2013, available at: https://www.reuters.com/article/uk-korea-north-nuclear-idUKBRE90N0Z020130124