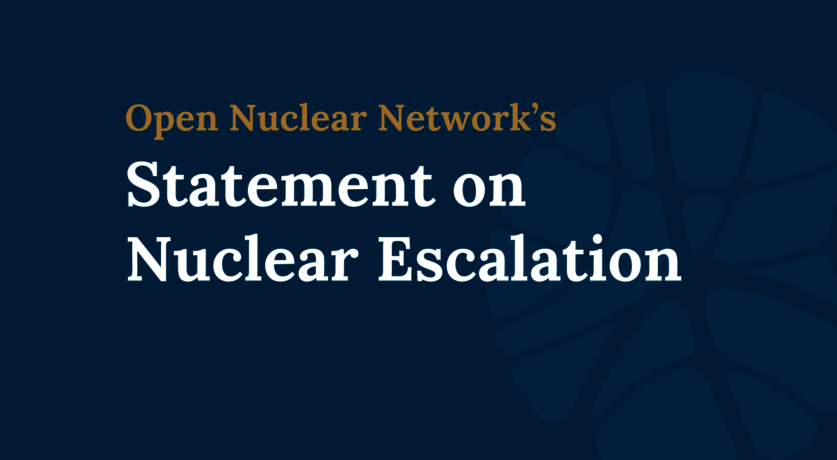 Conflicts involving nuclear-armed States always pose some risk of escalating to nuclear weapons use. During times of heightened tensions and high stakes, it is only through dialogue and communications, based on credible information, that de-escalation and conflict resolution are possible.

Conflicts involving nuclear-armed States always include some level of risk of escalation that could potentially lead to the use of nuclear weapons, especially when there is a lack of shareable credible information and communications breakdown. As conflict escalates, the problems associated with distrust, scarce communications, and the lack of fact-based, verifiable, and commonly available information are compounded by the need for decision-makers to make difficult choices within ever shorter time periods. What is needed in these times to de-escalate tension is a re-doubling of dialogue and critical evaluation of information.

In the currently unfolding crisis in Ukraine, ONN notes some positive steps toward re-engagement, including the 9 March high-level meetings between the Russian and Ukrainian Foreign Ministers in Antalya, Turkey; the three rounds of talks between Russian and Ukrainian delegations in Belarus; and the continued dialogue between French President Macron and Russian President Putin. Trusted international partners have also continued to act to facilitate dialogue and encourage de-escalation and resolution of the conflict, such as Turkey, which hosted high-level meetings on 9 March, international organizations, such as the International Atomic Energy Agency, which participated in discussions in Antalya with the aim of ensuring the safety and security of nuclear facilities and materials in Ukraine, and civil society, including organizations such as the European Leadership Network, which continues to facilitate dialogue on NATO-Russian risk reduction.

To help de-escalate the conflict, ONN recommends that all interested parties make a deliberate effort to focus on information from highly credible sources. Disinformation and misinformation, including sensationalizing articles commonly shared on social media, contribute to common misconceptions and misunderstandings. This can result in decision-makers either being ill-informed or feeling pressured to make bad decisions by an uninformed public. The misinformation spiral can ultimately contribute to further escalation of tensions that, in a crisis involving a nuclear-armed state, could lead to nuclear escalation. ONN suggests that readers think critically when consuming news, considering questions such as:

"Where does the information come from?"

"Does the person sharing this information have expertise in the subject matter?"

"How can I verify this information?"

ONN continues to work to facilitate dialogue and evaluate open-source information related to potential nuclear escalation and to provide unbiased analyses to decision-makers and to the wider public. In times of crisis, with heightened tensions and high stakes, especially crises that could lead to nuclear escalation, dialogue, and communication based on reliable information are even more essential, and the only way leading toward de-escalation and conflict resolution.