On 20 October 2021, the Korean Central News Agency (KCNA) of the Democratic People’s Republic of Korea (DPRK) reported that the DPRK’s Defence Science Institute had conducted a test of a new submarine-launched ballistic missile (SLBM) on 19 October. This is a preliminary brief on the test launch.

On 20 October 2021, the Korean Central News Agency (KCNA) of the Democratic People’s Republic of Korea (DPRK) reported that the DPRK’s Defence Science Institute had conducted a test of a new submarine-launched ballistic missile (SLBM) on 19 October. This is a preliminary brief on the test launch.

A. Design of the SLBM

The SLBM launched on 19 October appears to be the same type as that showcased at the Defence Development Exhibition “Self-Defence-2021” held on 12 October 2021.1 The missile is powered by a single stage solid rocket motor and has four “bumps” around the tail section. Four grid fins, which are in a folded position before launch, are located between the four bumps (Figure 1).

Figure 1. The small SLBM that made its public debut at the exhibition on 12 October (left and right). The grid fins installed between the bumps are meant to increase the stability and possibly control the attitude of the missile during the ejection process. Images: KCNA, KCTV, annotated by ONN

Photos released by the DPRK on 20 October show that the four bumps and the four grid fins are all part of a gas generator. The gas generator of this SLBM should serve at least two functions: (1) to cover and protect the (possibly folded) wings of the missile and (2) to push the missile from the launch tube.2 As can be seen in Figure 2 below, once the missile was ejected into the air, the gas generator was discarded and the missile’s motor was ignited (Figure 2). 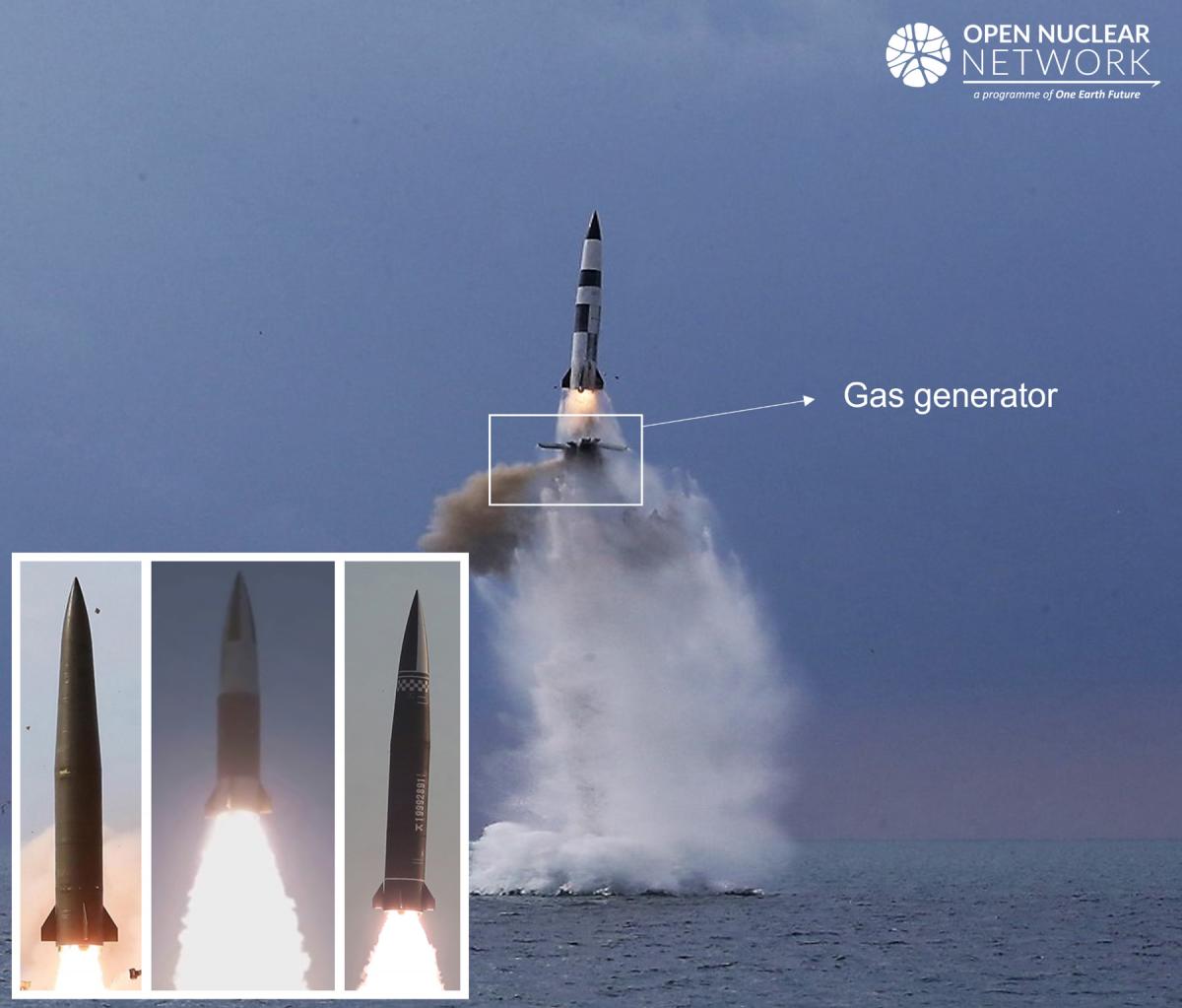 Figure 2. The gas generator was discarded after the new SLBM was ejected out of the water. Inset photos from left to right: KN-23, KN-24 and another SRBM tested by the DPRK on 25 March 2021. Image: KCNA, KCTV, annotated by ONN

KCNA reported that the new SLBM was launched from the “8.24 Yongung” [8.24 영웅함] (Figure 4).4 This is the first time the DPRK has revealed the official name of the country’s experimental ballistic missile submarine, which is often referred to by external observers as “Sinpo-B class,” “Gorae class” or “Sinpo class”.5 Although KCNA reported that the submarine had also carried out the country’s first SLBM test five years ago, on 24 August 2016, the Republic of Korea (ROK) has assessed that the SLBM tests carried out in the past were conducted from a testing barge, rather than from a submarine.6 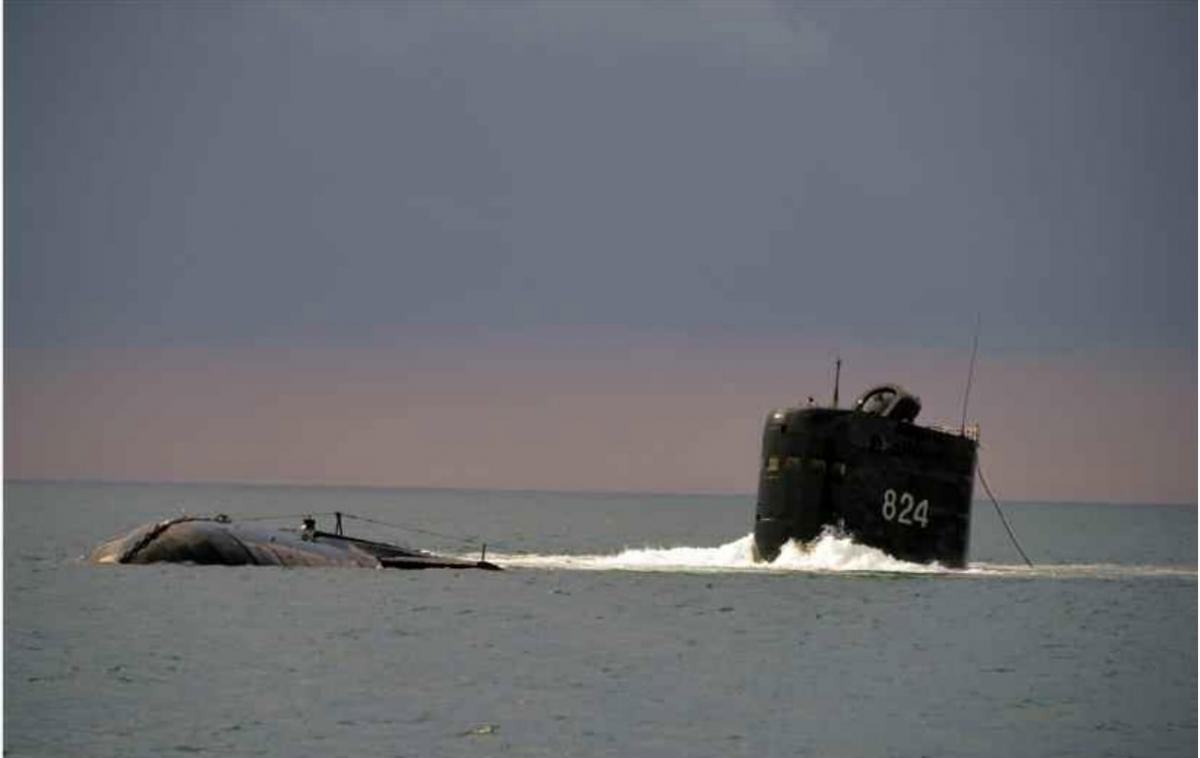 Figure 4. Photo of the “8.24 Yongung” released on 20 October 2021. The cover of the SLBM launch tube, which is located in the sail of the submarine, is open. It appears that there is only one launch tube inside the sail. Image: KCNA

Citing an unnamed source, the Yonhap News Agency in the ROK reported that the missile, launched from waters east of Sinpo, had traveled about 590 kilometers at a top altitude of around 60 km.7

As the reported trajectory and appearance of the newly tested SLBM are similar to those of other solid-fuel SRBMs of the DPRK, which are capable of gliding and performing maneuvers during flight,8 it is reasonable to assess that this new SLBM has the same capabilities. The KCNA text seems to confirm this assessment insofar as it states that the missile has “flank mobility and gliding skip mobility.”9

Judging by the small size10 and single stage design of the new SLBM, it is also reasonable to assess that it has a shorter range than other Pukguksong-series SLBMs. The appearance of a short-range SLBM indicates that the DPRK might wish to deploy both short-range SLBMs and mid-range SLBMs to cover different targets in Northeast Asia.

1 For detailed information regarding the exhibition, Tianran Xu, Brief on the Defence Development Exhibition of the Democratic People’s Republic of Korea, ONN, 19 October 2021, available at: https://oneearthfuture.org/research-analysis/brief-defence-development-exhibition-democratic-peoples-republic-korea

2 The gas generator builds up steam pressure inside the launch tube housing the ballistic missile and forces the missile out of the tube prior to the ignition of the missile’s rocket motor. See: The Future of the U.S. Intercontinental Ballistic Missile Force, RAND, 2014, available at:https://www.rand.org/content/dam/rand/pubs/monographs/MG1200/MG1210/RAND_MG1210.pdf

3 The official DPRK designation for the KN-24 is Hwasong-11 Na. Tianran Xu, Brief on the Defence Development Exhibition of the Democratic People’s Republic of Korea, ONN, 19 October 2021, available at: https://oneearthfuture.org/research-analysis/brief-defence-development-exhibition-democratic-peoples-republic-korea

5 For more information regarding the ballistic missile submarines and SLBMs, Tianran Xu,BallisticMissile Submarines and Submarine-launched Ballistic Missiles of the Democratic People’s Republic of Korea, ONN, 16 April 2021, available at: https://oneearthfuture.org/research-analysis/ballistic-missile-submarines-and-submarine-launched-ballisti c-missiles-democratic

7 (7th LD) N. Korea fires what seems to be SLBM toward East Sea: S. Korea, Yonhap News Agency,19October 2021, available at: https://en.yna.co.kr/view/AEN20211019002958325?section=nk/nk. The Japanese Ministry of Defence (MOD) announced that the DPRK had launched two ballistic missiles, one of which flew approximately 600 km with a top altitude of about 60 km through an irregular trajectory, and that it was still analyzing the trajectory of the other missile. See: お知らせ [A public announcement], Ministry of Defence, Japan, 19 October 2021, available at: https://www.mod.go.jp/j/press/news/2021/10/19d.pdf. The Japanese MOD stated that it continued to analyse the trajectory of the other missile. No further details were disclosed by Japan as of the time of this publication. As the photograph of the submarine in Figure 4 above suggests that there is only one launch tube in the “8.24 Yongung”, it is not clear on the basis of which Japan referred to the launch of two ballistic missiles.

10 Tianran Xu, Brief on the Defence Development Exhibition of the Democratic People’s Republic of Korea,ONN, 19 October 2021, available at: https://oneearthfuture.org/research-analysis/brief-defence-development-exhibition-democratic-peoples-republic-korea

Pyongyang, October 20 (KCNA) -- The Academy of Defence Science of the DPRK test-fired a new type submarine-launched ballistic missile on Tuesday.

The Academy said that it presented a report of loyalty to the Party Central Committee with the pride and honor of succeeding in the test-launch of new type SLBM from the same "8.24 Yongung" ship from which the first submarine-launched strategic ballistic missile was successfully launched five years ago to demonstrate the military muscle of the DPRK.

It clarified that the new type SLBM, into which lots of advanced control guidance technologies including flank mobility and gliding skip mobility are introduced, will greatly contribute to putting the defence technology of the country on a high level and to enhancing the underwater operational capability of our navy. -0-